For the first time in the brief life of this blog, I’m writing about a story that’s not from a brand-new, hardcover, big NYC-press book. Already, I’ve already received some private FB messages asking if I’m only going to focus on those, if perhaps I’m also going to write about stories from lesser-publicized authors, too. While this is only my fifth installment, I certainly can see what some readers would think that, so far covering authors/books from Random House, FSG, and a couple from Viking. My full intent is to read and report on an eclectic 366 stories, from large presses, small presses, university presses, and indies, as well as stories from lit mags, online sources, and paintings I find while spelunking. If it’s published somewhere, I’m going to try to get to it.

So today, I read “Bobcat” by Rebecca Lee, the title piece from her collection Bobcat and Other Stories, out from Algonquin Books (of Chapel Hill, North Carolina!). The book is not brand-new, either, though it seems like it is to me. Yesterday, I mentioned that I found no less than nine story collections faced at my local B&N, which makes me happy to no end, but that’s a recent development. Just a year ago, I was luck to find a single collection on those front shelves. A year ago, that collection was Bobcat by Rebecca Lee.

I have a weird sense of responsibility when it comes to short stories. I love short stories more than any other pursuit—(duh)—and I also strive to be a proper literary citizen. Part of that is buying books at readings, and often those books go unread until I do something like start a blog and write about a story every day; if I saw you read in Muncie, Indiana, in 2009 and bought your book, it’s likely I’ll be reviewing one of your stories here soon! I also try to buy as many collections as I can, many of them at readings, many at AWP each year.  But as someone whose money burns a hole in his pocket, I’m always looking to buy more things, to collect them, and as a creative writing professor, I’m always trying to buy the new things, just so I can present unique readings to my students, so I can “find” them before they do.

Anyway, I saw Bobcat on the shelf at B&N for quite some time, close to a year, and every time I went there—my family and I usually stop by once a week—there it was. Why didn’t I buy it right away? Well, this is where it gets complicated. I have sort of this weird combination of obsessiveness and unnatural logic, one that gets me saying things like “There’s that Bobcat book again. I should get it. But no, it’ll be cheaper on Amazon. Or wait, even better, I’ll order it from the campus bookstore’s little literary nook, as I want to support that store and make sure it stays open.” I’d think about it too much, not buy it, and black helicopters would do laps over my head in the parking lot. Eventually, though, logic prevailed, and I just bought the damn book at B&N. And here we are.

Bobcat was another book that sat on my shelf for months before I was able to get to it (this will be the norm, rather than the exception, for this project). A student of mine, Ana Berkovich, had read it, said it was great, told me I should read it already. That was at the start of last summer. But again, here we are.

The story “Bobcat” leads the book off, which is not uncommon for title stories in collections, but there’s more to it than that (more on this later). Going in, I really didn’t know what to expect from the book, or the story. I’d not read Rebecca Lee before. She has one novel out, The City Is a Rising Tide, but I don’t read a lot of novels, so that’s not shocking. Lee also doesn’t seem to publish in lit mags, as the only three published stories in Bobcat were in The Atlantic Monthly (or her lit mag stories just aren’t in the book), back when they still did that. The book’s cover has a picture of a big cat, one that lacks the extended whiskers of the bobcats on my Cub Scout badges. Maybe it’s a clean-cut bobcat? This bobcat also seems to be gripping something black in its mouth. Further inspection leads me to believe that these black lines are letters, as they match the font of the title words lingering below. Did the bobcat eat part of the title? Is there a word missing? What word would be made of five capital ls or five small Ls? Wait, I’m overthinking this. Back to the story.

“Bobcat” is what I’d call a dinner party story, meaning that it’s a story that takes place at/during a dinner party. I’m not sure if this is an official genre or just one in my mind. I recall Coover’s “The Babysitter,” a bunch of Carver stories (if gin counts as dinner … it does), Orringer’s “Pilgrims,” and most of the stories in Michael Chabon’s first collection, A Model World. This dinner party seems to take place in New York and the people involved are what my dad would’ve called “high-falutin’.” The narrator is a big-time trial lawyer and her husband has a novel coming out soon; money is not a factor in these people’s lives. Other guests include his editor, their mutual friend who grew up with the lawyer and went to school with the writer, and another client of the editor, whose recent memoir about having her arm chewed off by a bobcat, was a smash hit, and gives us our title.

And this is where the bobcat comes in. Part of me, before starting the story, was hoping it was maybe told from the bobcat’s point of view, sort of like White Fang, which would make me ask, “Why a bobcat?” Of all the animals, of all the big cats, why this one? When the titular beast showed up only as an anecdote in a secondary character’s past, I felt cheated: What kind of diction does one use for a bobcat? How does it think? What’s its favorite food? What kind of car does it drive

Okay, not really. The bobcat actually works even better than that here (go figure), as a literal, unanthropomorphized bobcat. It works on another level, too, though: It seems like the bobcat, a bobcat,  is a metaphor, be it in the memoirist’s book, in this short story, and perhaps for the whole collection (it being titled Bobcat and all). It’s not as simple as “life is like a bobcat” (yes, I know that’s technically a simile), but Lee crafts it into something that stands for something, on a more subtle, deep level; I’m no poet, but that seems like a metaphor to me. It’s as complicated, yet fitting, as some other animal metaphors I can think of, like “elephant in the room” or how those MTV guys jimmied “catfish” into a new meaning. This metaphor brings the story together, more or less, as much as the ending does, both making everything make sense, and satisfyingly so. Another reason for this story to start the collection.

With any great dinner party story, the real key is characterization. An author isolates a set number of people in a room—often people who don’t know or agree with each other—and forces them to interact for a set time. It’s a variation on Sartre’s No Exit, and other people in this story border on the outskirts of hell throughout. Everyone seems distinct and are lasting, be it the editor, the friend, or the couple with the hyphenated last name who teeter on the edge of disaster the whole time. They all serve a purpose too, some of them sleights of hand, some of them much more. Lee sets her guest list well, and it pays off, the perfect complement of roles placed perfectly into motion.

It took me a long time to get to this book and I’m glad I finally did. “Bobcat” makes me want to read more of the book, figure out what else Lee can and does do. Plus, maybe I’ll figure out what those things are in that bobcat’s mouth. But probably not. 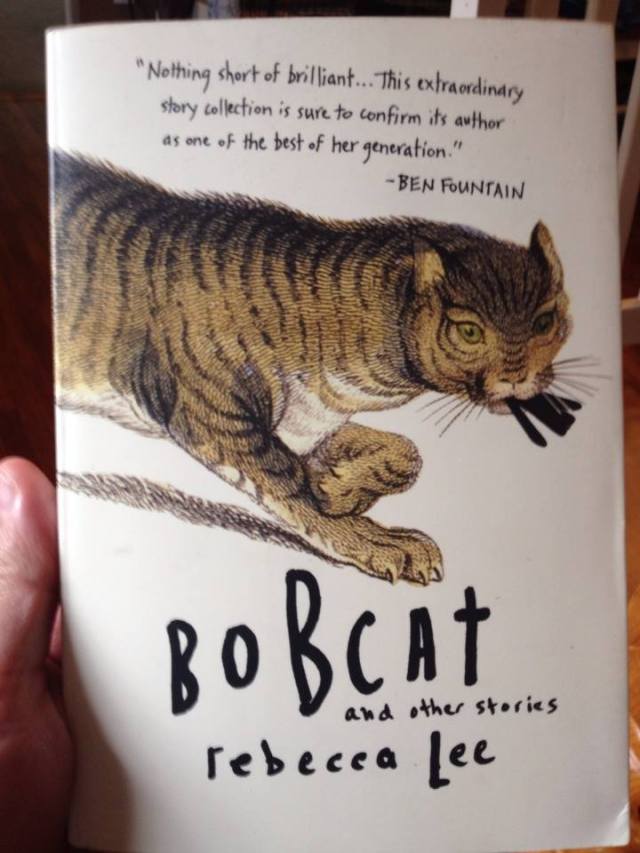