Somewhere in the back of my mind, I thought I might get some free books out of this blog. I didn’t go into the project thinking that, hoping authors and presses would find out what I was doing, see me as a promotional opportunity, and get me their books, new or old, vying for one of the precious 366 spots. If I had given it any thought, though, I may have predicted it. One time, I went to Matt Bell’s apartment in Ann Arbor and there were books everywhere. I mean, Karen and I have books everywhere, in every room, stacked on every flat surface; my office is even worse (“worse” as in messier—I like the book chaos). But Matt, he had a lot of books. This was when he was still doing is blog every day—kind of like mine, promoting authors he liked—and also reviewing a lot of books, several a week. Word had gotten out. The day I was at Matt’s place, he came home to find seven or eight books that had been delivered that day, and in the half hour I was there, deliverypeople knocked on the door and delivered two more. Matt and the UPS guy were on a first-name basis, I saw, and it made sense. If I’d forecasted a fraction of Matt’s popularity, I would have assumed I’d get a book in the mail once in a while.

Three days into the project, Wendy J. Fox became the first writer to send me her book. She tracked down my department address at Missouri State, wrote me a lovely note, and gifted me a copy of her collection The Seven Stages of Anger and Other Stories. By January 5, I had her book, and a few weeks later, here I am, discussing “The Car,” one of its eleven stories. Too bad I’m not blogging about hundred dollar bills or Corvettes.

The Seven Stories of Anger won the 2014 Press 53 Award for fiction, and like a lot of story collection contest winners I’ve read, it’s a very cohesive collection, all the stories similarly themed. A themed book can really stand out when books are lined up next to each other and a winner must be chosen—I’ve run the Moon City Press Fiction Award for two years now and it’s by far the hardest editing job I’ve ever done, reading so many great books, only getting to pick one Anything that can make a book stand out helps its cause. I’ve read half of the stories in Fox’s collection so far, and most of them have a few things in common: a young married couple, relationship falling apart, a single child in the mix, and lots of introspection. Not to say the stories are redundant—they all have varied plots, narrators, and voices—but some of those same parts are under all the hoods. Fox found something she does well and honed in (the title story, “The Seven Stages of Anger,” proves much different, and is easily my favorite in the collection).

Having published a book of breakup stories of my own last year, I am certainly drawn to Fox’s stories, the way she depicts the disintegration of love. I’ve chosen “The Car” because it is perhaps the most tragic, this particular relationship going south at the worst time, the couple is expecting their first child. This couple, Brian and Jenny, seemed doomed from the beginning, meeting and dating and moving in with each other and marrying and getting pregnant, all, more or less, by accident. How? It was all a lot easier than moving on, starting over, finding someone else. How many marriages work, I wonder, because people would rather be unhappy than go through a rough patch, than to rip the Band-Aid off?

I think that’s who Brian and Jenny are, people who move forward because it’s easier to do what’s expected, follow the blueprint, than anything confrontational. A metaphor that Fox uses is the house the couple buys early in the story. Each of them hates something about the house and don’t want to buy it, but when their realtor threatens to quit because they hate everything, they cave and sign the papers. Jenny notes that she does like the tile in the bathroom—that’s this couple in a nutshell, settling like world-champion settlers, making little excuses, like nice bathroom tile, to accommodate their fate. They’re such great characters in this way, as are the characters in all of Fox’s stories. An even better example of this settling occurs at the end of the story, concerning the titular vehicle, but I’ll leave that for you to explore on your own.

I admire Wendy J. Fox for her writing, but also for her tenacity, to send a stranger her book, ask another writer to speak up for her. I’m honored to do so. As I remember the origin every book I own—how I came across it, that is—I’ll always remember The Seven Stages of Anger as the first book I found in my mailbox, post-blog. Then I’ll remember it for its contents, Fox’s tender tales, her knack for catching people at their most vulnerable, exploiting them for our reading pleasure. 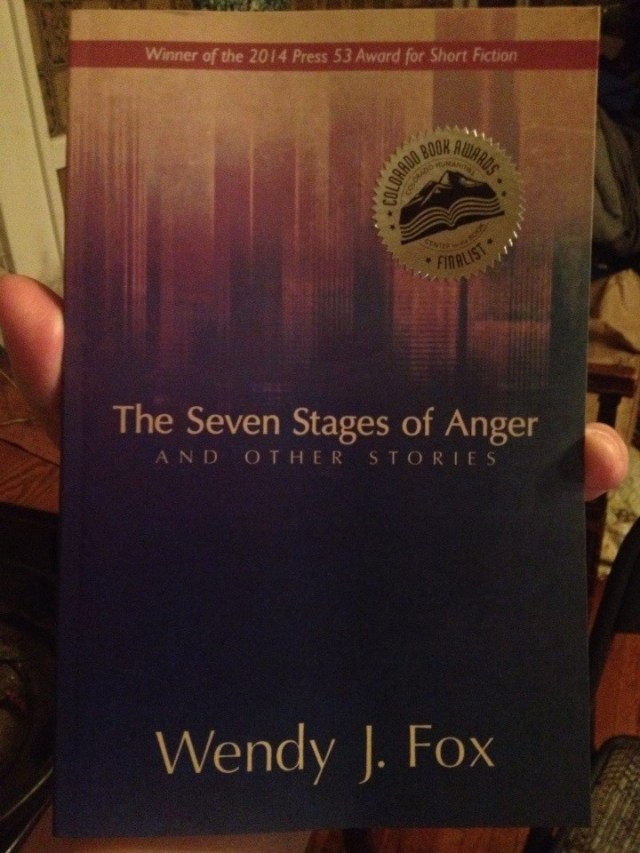