Happy Pączki Day! I’ve missed out on writing themed blogs for this year’s previous holidays—Groundhog Day, Martin Luther King, Jr., Day, and New Year’s Day—but learning from my mistakes, I’ve gone ahead and done a day-appropriate blog for this year’s annual decadence day, one of the most important in the Polish American calendar.

What, not familiar with Pączki Day? Some of you might know it as Fat Tuesday, and others might think of it as Increase Your BLI (body lard index) Tuesday. Whatever the case, I’m trying to keep my old Chicago/Midwest traditions going strong, here on Story366 and in Missouri. I can’t replicate the experience of eating a pączki for you readers—my powers are not that strong—but I have bought up all the pączki I could find and left them in the mailroom of the English Department at MSU. One Walmart in town—of the nine (not a typo)—carries them, but I have to get there a day or two before, because they sell out early (something I found out in the dark, dark February of 2014). Then, if a colleague says, “Thanks for the donuts, Mike!” I go completely apeshit, throwing whatever I have in my hands against the wall, exclaiming, “It’s not a fucking donut! It’s a goddamn pączki!” So far, I think I’m winning the battle, getting the word out, but every year, I spend the day after Pączki Day with my Human Resources rep, discussing better ways to channel the rage I feel in the workplace.

Today’s story, “Tosca” by Stuart Dybek, from his 2015 collection Paper Lantern: Love Stories (one of two he put out last year), doesn’t haven’t anything to do with Pączki Day. True. Finding a story I haven’t read in one of the books on my desk that deals with pączki, was too tall an order. I instead settled for a piece by my favorite Polish-American fiction writer—the Polish-American fiction writer—Stuart Dybek. Dybek is one of my literary heroes, and in a way, more than any other writer, has formed my own work. Dybek’s first two collections, Childhood and Other Neighborhoods and The Coast of Chicago, so fully and exactly relay my own childhood experiences—growing up Polish Catholic in Chicago—that I never engaged in those tales myself. In some way, Dybek stole a lot of my story ideas—before I was born—and I’m glad. I look at it this way: He gave me an excuse to write beyond myself, to be more creative, to avoid a lot of that nun-and-altar-boy hijinks that could have dominated my work for years. Good thing, too, as I was able to move on to people fucking each other with peanut butter sandwiches a lot sooner than I otherwise would have.

“Tosca,” instead, is about an execution, or at least an almost-execution. The story begins metafictionally, with a familiar firing squad set to execute a man. The narrator starts breaking down that key Ready! Aim! Fire! moment, investigating what all the involved parties could be thinking, form the condemned man to the soldiers to the woman whose black slip they’re using as a hood. There’s a lot of “If this were a movie”-type lines, setting up a story that would read more like Barth’s “Lost in the Funhouse” than Sartre’s “The Wall.” The narrator soon proclaims that he/she has a story to tell, and that moment right after Aim! and before Fire! is as good a time as any to get everything in, before it’s too late. Immediately, I thought of Bierce’s “An Occurrence at Owl Creek Bridge,” which Dybek refers to right away, and Wolff’s “Bullet in the Brain,” which isn’t mentioned. Life flashes before our eyes as we’re dying, don’t you know, at least according to great American short story writers.

Dybek takes the story in another direction, though, never getting around to Fire!, to the man in the slip-turned-hood dying (though he has fun with that in the last two pages). Instead, Dybek uses the occasion to include some anecdotes about some executions, both historical and fictional, one-to-two-page stories that could have easily stood by themselves as shorts. Again, it would have been easy to peg “Tosca” as something it’s not, to think the rest of the story would be a compilation of these firing-squad anecdotes, circling back to that courtyard and the eventual end of the man in the hood.

Then Dybek goes off in yet another direction. He explains the origin of his title, Tosca being the name of an opera, one that features a man sentenced to die by a firing squad in its third act. It seems like another tie to the overall story, but Dybek uses the opportunity to abandon firing squads, almost completely, venturing off into anecdotes about opera. For the third time in eight pages, the author pulls a sleight of hand, keeping us guessing, surprising us. It’s brilliant and beautiful, another perfect stroke by a master.

This invocation of an image, of a sensory detail, reminds me most of another Dybek story, “Paper Lantern,” one I read back in grad school and then had the pleasure of hearing Dybek read when he visited Bowling Green in 1996. In that story, the last in this book, an inventor is taken back to a fire from his youth as he watches his workshop burn to the ground, a long-forgotten memory reignited in his brain. It’s the same trick in both stories, one story jogging loose another, and I wonder if the rest of the stories in Paper Lantern use this technique, or if it’s just its bookends. I plan to find out.

Since Paper Lantern is a collection of love stories, maybe I should have reserved him for Valentine’s Day (note, one sex scene in “Tosca” is the most sensual I’ve ever read, and I might just read it aloud to my wife, the next time I need help with my game). But I couldn’t resist celebrating my Polishness on Pączki Day, so the great Stuart Dybek I present to you. Now all I have to do is figure out who to write about on Casimir Pulaski Day. 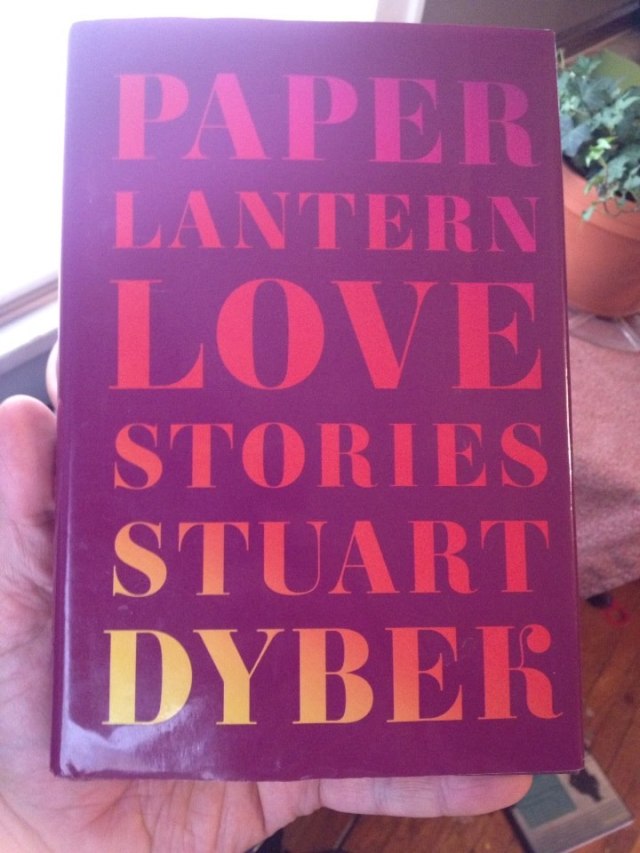