Happy Election Day, Story366! Well, it’s a primary election day, anyway, in the state where I live, Missouri, as well as the states I used to live and vote in, Ohio and Illinois. I miss being in Ohio for a few reasons, one of the oddest ones being that I lived in a battleground state, maybe the battleground state, always at the center of the news, of the election, of shaping the country. That usually meant I got to see all the candidates come to Bowling Green, or at least Toledo, and surely, I had the chance to see Bill Clinton, Al Gore, John Kerry, John Edwards, Barack Obama, Hillary Clinton, as well as a bunch of other people I never would have gone to see. Bernie Sanders was at the basketball stadium on campus here at MSU just the other day, four blocks or so from my house, but I was out of town. Still, election fever! I’m wearing my I VOTED sticker proudly and am nodding at anyone else who is, too.

I wish I had a short story to read by one of the candidates, or even a former candidate, as that would fit in with Election Day festivities. Sadly, I don’t think there is any short fiction out there by such people. If I was a poet and doing Poem366 instead, I could hit you with some def Jimmy Carter rhymes, but I’m not.

The next-best thing might be Okla Elliott, a dude who is an extreme political activist. In fact, he recently released a sanctioned autobiography of one of the major candidates, and on FB, his profile picture is of that candidate. If I can’t read and write about a story by a candidate, I’m more than happy to read and write about a story by my pal Okla, a passionate political force who is trying to do right by America.

I was happy to pick up Elliott’s collection From the Crooked Timber: A Novella and Stories, out from Press 53 in 2011. I read several of the stories in the book (but not the novella), and think I have a pretty good grasp of what Elliott does, of his voice, and the world he paints in this book. I like all the stories I read, but today will focus on “The Queen of Limbo,” the opening number.

“The Queen of Limbo” opens with a neat metaphor, the titular character, young Sylvie, walking along the concrete median in the middle of an eight-lane highway. The story’s protagonist and narrator, Jasper, who seems genuinely concerned that there’s this young girl in such a dangerous and lonely situation, the highway pretty busy, cars buzzing by her from either direction. After some coaxing, Sylvie gets in Jasper’s beater and Jasper agrees to take her where she’s going, Pink’s Skate Rink, where she can participate in a limbo contest (get the metaphor yet?) and win free skating for a year. So far, so innocent.

But is it? Sure, a good Samaritan might pick up Sylvie, get her out of harm’s way, or even call someone, the police, tell them there’s a young teen girl stuck in the middle of the highway. But really, anybody (especially a guy) should know that picking up a teenaged girl is not a  good idea, and even if Jasper has only the best intentions—to remove her from immediate danger—he goes too far by hanging out with Sylvie a minute longer. Not only does Jasper take Sylvie to the skate rink, but he buys her Hardee’s along the way and goes inside and watches her compete in the limbo contest.

By that point, it’s pretty clear that Jasper was not just trying to get Sylvie off that median, but that his intentions may have been  more nefarious. The trick is, Elliott doesn’t write it that way—he writes Jasper as genuine, gushing with concern in the early stages of the story, and we readers might get the idea that his intentions are 100 percent noble. By the time Jasper is drinking gin and orange Slices in the grandstands, making comments about the curvature and feel of Sylvie’s back, he’s gone over the waterfall: Jasper’s a creep. And that’s what I love about the story, Elliott writing about the bad guy, here and in his other stories. Protagonists are complex at best, evil at worst, and from the three stories I read, they tend to stray more toward the worst.

Elliott also seems to be a master of dirty realism, all of his characters plucked right out of the middle and working classes, though not many of them seem to be working, or capable of it. Jasper doesn’t have a job, right? But a guy who gets drunk off bottom-shelf gin and orange Slice from the roller rink is as dirty and as real as they get. I think of Elliott’s characters the same way I think of Carver’s characters, though Elliott’s are perhaps further past the threshold into no return than, say, a Mel McGinnis. As far gone and perhaps even evil as these people are, I couldn’t help but root for them a little, hope that they make better decisions (which they don’t). Bad people can likeable, it seems, though if I was Jasper, I’d kept driving past Sylvie. Maybe that makes me a different kind of bad than he? Maybe not.

If I can honor Okla Elliott, Story366 seems to be a great way. I highly recommend From the Crooked Timber, but I also recommend that you vote today, whomever you want to vote for. That would honor this writer and his mission as much as reading his tremendous work. 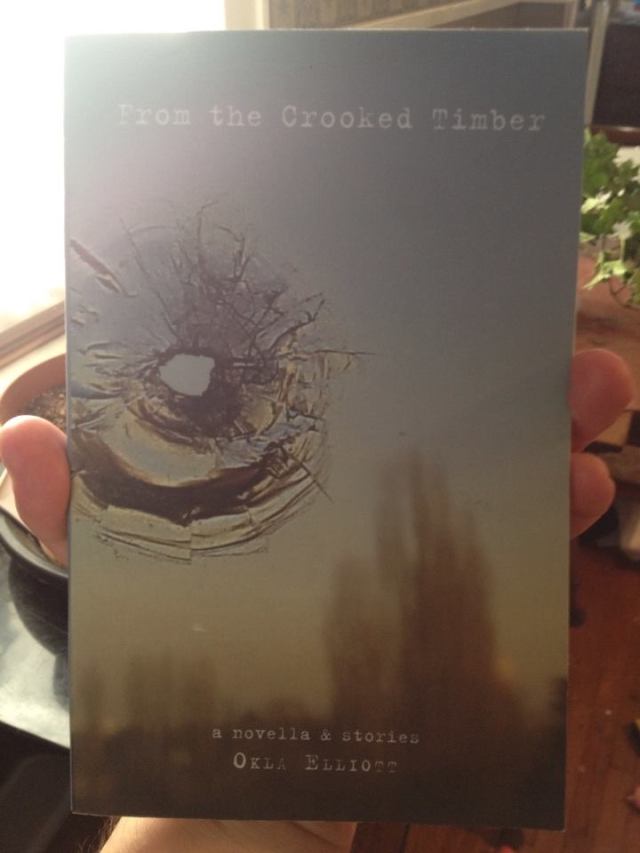