Welcome to Sunday on Memorial Day Weekend, Story366. It’s one of those Sundays in America where we act like it’s a Saturday, right after we acted like it was Saturday on a Saturday. How many times a year does that happen? Five? So many people in America live for Saturdays, the day they can sleep in and then stay up late, do whatever they want, not having to get up the next day for work. Only five times a year do we get to do that two days in a row. Today was one of those days, and that’s what it comes down to: Getting to do whatever you want, without a sleep schedule, two days in a row. I love America.

This helps me as a beer vendor, too. Usually, people are more subdued on a Sunday, drinking less, having spent a lot of their spending money earlier that weekend, starting to plan for going to work on Monday, maybe cutting back on how many beers they drink. (Plus, there’s the church angle, and how a lot of families come on Sunday, both factors that cut down on beer sales.) But a long weekend, those two days without a sleep schedule, mean that I have one more day when people drink their asses off. Today was one of three Sundays every season that happens, the other two being Fourth of July weekend and Labor Day weekend; of course, there’s no guarantee that the Cubs will be home for all three in any given year. Usually, it’s one or two, never three, never none. In any case, I had a nice day today, the best day of the weekend, selling a lot of suds, giving me a deeper thigh burn than I had yesterday. But the Cubs won, so who cares, right?

For today’s post, I read from Robert Vivian’s book Lamb Bright Saviors, chosen by Ron Hansen for the Flyover Fiction Series from Bison Books, a little imprint of the University of Nebraska Press. Before I go any further, I should note, this might not be a story collection. It certainly could be called a novel-in-stories, or maybe just a novel with chapter titles. When I picked it up at that Powell’s in Hyde Park last week, I flipped through and it looked like a short story collection, so I put it on the pile. But writing this tonight, I just want to call a horse a horse and not call a horse a lamb.

The book Lamb Bright Saviors is about this dying preacher named Mr. Gene who walks up a road into a town, trailed by a girl named Mady, about thirteen, who pulls a wagon full of Bibles behind her. I know this because I read the first story/selection/chapter, “Noon Song,” which details this set-up (and for some reason, is in all italics). The second piece, “Mady,” is from Mady’s perspective, the first of four selections named “Mady,” perhaps the protagonist of Lamb Bright Saviors, because she’s with us the whole time and we go to her four times (and Mr. Gene dies—he’s a dying preacher, remember?).

But I’ve chosen, for a couple of reasons, to write about the third piece, “Oly,” a story about one of the men who find Mr. Gene and Mady on the side of the road after Mr. Gene has collapsed. Oly and his friends/brothers have been fishing in a river when they heard Mr. Gene cry out up on the road, though it’s not necessarily clear if it’s because he’s in pain or because he’s just preaching—Mr. Gene preaches as he walks along, whether there’s anyone besides Mady to hear him or not. And because some of his preaching is of the speaking-in-tongues variety, when Oly and his boys come running, Oly’s never sure if Mr. Gene’s speaking the Good Book or having a seizure.

One thing that made me pick “Oly” is because Oly’s kind of nuts, and as he stands on the road, watching Mr. Gene convulse, he wants to laugh. In fact, he has to concentrate very, very hard to not burst out into maniacal laughter, and Vivian has fun inside Oly’s head, his thought process as he fights the urge to lose it, right there, in front of this dying preacher. I like that train of thought, how close Vivian takes us into madness without going all Joker on us, though Oly’s certainly cut of that brand of cloth.

“Oly” isn’t a long or complicated or even a resolved story—and again, that might be because it’s a novel chapter and not a story—so I won’t go any further into what happens, how Oly changes, what he sees after the entangled naked ladies. But I didn’t choose “Oly,” or Oly the man, because of what happens, more because of this character sketch, this oddball who keeps his oddballness bottled up because he wanted to do the right thing, wants to keep on doing it: He knows it’s moral to help save this preacher, so that’s what he does. Despite his psyche, Oly’s a pretty good guy. Does it matter that he’s imagining a couple of his nudie book girls in a sixty-nine while he does it? No, I guess not. (And yeah, the preacher dies, but as far as I can tell, that has nothing to do with Oly’s interior perversions.)

I want to finish Robert Vivian’s Lamb Bright Saviors because I like what I’ve read and also because I want to know what happens, meet more of these characters, and just read more of Vivian’s sometimes challenging but lush prose. I didn’t know his work before this, but know a lot of people who have studied with him at the Vermont College of Fine Arts, and at River Pretty, this writer’s conference that takes place in the Ozarks every semester, run by graduates of Missouri State. I’ve heard nothing but good things about him and those things I heard are right on. 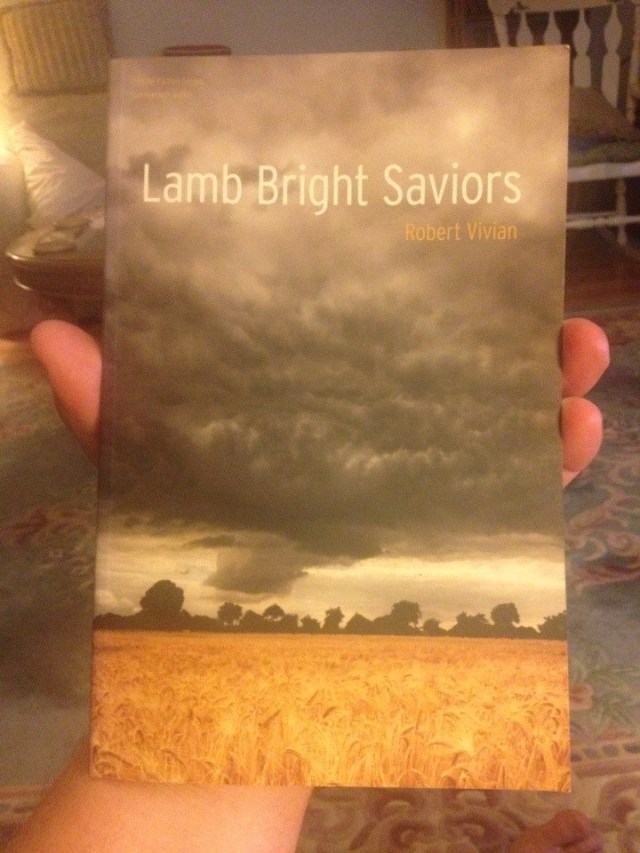