Good today to you, Story366! Just a day after returning to Springfield from Kansas City, here I am, on the road again, outside St. Louis, reading and writing today’s post in a hotel lobby. It was nice to be home, but the plan was always to finish that trip, regroup at the base of operations, then head up to Chicago for the last week of summer vacation. Driving the entire eight-hour trip with two kids is no picnic, so we often stop at this particular Drury Inn that’s just about at the halfway point, so the kids can swim and we can retain our sanity. So far, so good. This time tomorrow, I’ll be heading home from a Cub game, my last 2016 hurrah as a beer guy … until the playoffs.

On our way here, we finally took the plunge and stopped at The Uranus Fudge Factory. Yeah, that’s what it’s called. We’ve avoided it since it opened a couple of years ago, though we’ve giggled and pointed and taken pictures of the signs to post on FB, just like most people who pass by. It’s not quite Wall-Drug, but billboards line I-44 in Missouri for quite a few miles on either side of the UFF, all making the same silly, gross joke. Is it real? people have asked us. That’s can’t be real, they’ve said. Sadly, it is.

It’s kind of funny, an Interstate business making such a crass, obvious joke, and for sure, it’s an unforgettable name. Anyone who passes, especially more than once, is going to be curious, curious enough to stop by, spend a little money, and for a roadside candy store, that’s all they really want.

Going to Uranus (see—even I’m doing it now) makes the whole joke even stranger, however. We finally stopped—hey, we like candy, and since we’re potty-training our youngest now, we talk poop regularly these days, anyway—not knowing what to expect. When we pulled off, we were A) pleasantly surprised by how new, clean, and well kept the entire UFF complex was, including some nice paint jobs and a lot of landscaping; and B) that aside from oddly named fudge store, the complex includes a food truck court (which was closed, at 6 p.m.), a tattoo parlor, a strip club, and a gun store. And that’s it. So there’s this little ring of businesses off the highway, its centerpiece a candy store that uses a scatological pun as its name, and it’s surrounded by clearly adult-orientated mall-mates. Karen said the really smart thing as we walked into the candy store (which is a nice candy store, by the way, with old-time candies, pick-a-mix by the pound, and a decent fudge counter): “What’ the target audience of this place?” Good question. What kind of line are they throwing out there, trying to lure people from the highway? Their focus is candy and fudge, but they taint it with the poop joke. Even if you overlook that stab at humor, you and your kids are then treated to a nice candy store, but also a bunch of R-rated establishments like a titty bar and a gun shop, which is conveniently adjacent to the candy store, in the same building, a five-foot hallway separating the two; my sons and I peeked into the back and saw the guy behind the counter showing a customer how to load an assault rifle. Nice.

I’ve mentioned The Uranus Fudge Factory before as a joke, but today, I went there. I left with some candy—I’m a sucker for fruit slices—and I left confused. The people were nice, but at the same time, they sold a T-shirts that declare slogans like “The Best Fudge Comes from Uranus!” and “There’s Always a Party in Uranus!”—in kids sizes. What the fuck is this place?
For today’s post, I read from Sheila Heti’s collection The Middle Stories, out from McSweeney’s Books in 2012, though originally published in Canada in 2001. The Middle Stories is a book of shorts, with pieces ranging from two to seven pages, so I was able to read nine or ten tonight, here in the Drury Inn lobby. Heti’s stories play like combination fairy tale/allegories, mythical creatures like mermaids and giants often showing up as characters, while every line of every story feels thick with metaphor, like the situations are supposed to stand for something. I’m not always 100 percent sure that’s always true—sometimes, maybe, it just seems that way. The truth is, I’m not always smart enough to figure it out. I liked reading Heti’s work, loved her images, her characters, her unusual arcs, and the absurdity of it all.

The story that sticks with me the most is “The Favorite Monkey,” about this guy who falls in love with this monkey. He’s sitting under a tree, the monkey falls on top of him, and the two are completely and totally compatible. Heti never crosses any lines, making it weird, depicting the guy and monkey kissing (or worse), but they two are soulmates. Like I said, there’s a lot of absurdity going on here, so by the time I go to “The Favorite Monkey,” I wasn’t at all surprised by this match, this direction for one of Heti’s pieces.

The story takes a downturn when the monkey hears her mother calling to her and she decides to go back, settle her mother, pick up a few things, and then return forever. The guy, our protagonist, doesn’t like this idea, because he doesn’t want to be away from his monkey love for even a second, and worse, he thinks the monkey will get sentimental, stay with her mom, and never return. She assures him this isn’t true, which enters the story into the holding pattern, where our man has to endure the pain of the wait, missing his monkey love terribly, wondering if he’ll ever see her again. Friends try to console him, try to get him to forget the monkey, but he can’t.

That’s as far as I’ll go with the plot of this one—it’s only five pages long—so you’ll have to read it for yourself to find out if his monkey comes back or not. As noted earlier, this story has the air of an allegory, but what story is it trying to tell, trying to mask? What’s the moral? There’s a lot I can pull out of it, like how love can come in all forms. Or that love is fleeting and should be cherished when present. Or that if you’re lonely, you should sit under a tree and hope for the best. Any of these could work, but in the end, I don’t think I want to read Heti’s stories as these things I’m supposed to fully parallel with some real-world problem or lesson, that it’s that easy, that transparent. I enjoyed reading the stories for what they were, alternative narratives to the commonday, traditional story, Heti’s voice, sparsity, and wacky imagination the real stars.

All in all, The Middle Stories was a pleasure to read, Sheila Heti providing something I’ve not seen before in fiction, a style of story that seems unique to her. It’s almost like a two-for-one, a new author and a new type of story at the same time. Lucky for me. 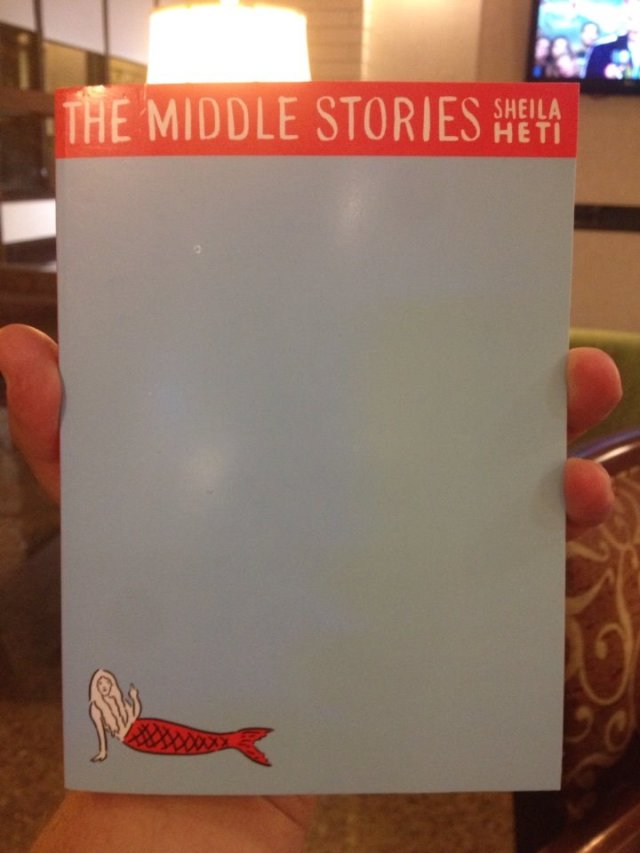