Monday, Story366! I hope yours was a good one. Today has gone rather well for me. As much as I like the laziness and lack of structure that the weekend brings out in me—it’s my true self, really—I kind of like getting back to the office. I like to get things done. Even though I try my best to turn my brain off for a couple of days, what happens instead is things just get backed up, pushed to the back burner of my consciousness, which feels kinda good for a while, but in the end, only makes things worse. With Karen gone this past weekend, I didn’t do a whole lot except feed, clothe, and bathe two small boys (and one large one). By the time Karen got back, I had stored so many things on my inner to-do list, a thick, black liquid started oozing out my left ear, a substance that burned holes in the carpet as it sloshed out of me. Okay, not really, but after some hang-out time with my best girl, I ran to the office and did like twenty-eight things, many after midnight.

Today, fter teaching classes and grading and doing a bunch of Moon City Press work, I read a couple of stories from Brian Booker‘s collection, Are You Here for What I’m Here For? out from Bellevue Literary Press. It’s a book I snagged at AWP—the last book on my pile procured there—right as everyone was closing up shop on Saturday afternoon. Some guy from the press (I assume) was walking around with a stack, asking if anyone wanted a copy to review, and I practically (or did) knock over a couple of people to get his last one; what a great way to get reviews, to disseminate galley copies/ARCs, much more efficient, I’m guessing, than mailing stacks off to random newspapers in hopes of scoring a few inches. It worked on me, anyway. I just might try that in DC next year.

So I read two stories from Are You Here for What I’m Here For?—there’s only seven, as they’re all pretty long—starting with “Gumbo Limbo” because I liked the title, then moved to the lead story, “Brace for Impact.” I can’t recall a collection where two stories could have been more different from each other—if I wouldn’t have read them from the same book, I would have assumed they were not only by different authors, but if those two authors would have met in a room and started talking fiction, they would have come to blows over aesthetics. “Brace for Impact” is a story about a guy who recalls a night from his high school years, at a party, making out with a girl, about to lose his virginity, only he has mono and a bunch of gross-ass warts on his hands; that character eventually makes his way upstairs and finds the host’s mother, who has recently survived a plane crash, and has an “encounter” with her. It’s a fantastic and weird coming-of-age tale, and I easily could be writing about it now.

Instead I’m writing about “Gumbo Limbo” instead, as it’s really a story unlike any I’ve read, let alone written about for Story366. “Gumbo Limbo” is mostly a fairy tale—so okay, I’ve read those before—but it’s hard to find one so original, so dead-on in its prose, so engaging, I sped my way through its thirty-something pages, completely entranced by Booker’s writing, imagination, and execution. And to note, this was the very first thing by him I’d ever come across.

Anyway, Booker starts off “Gumbo Limbo” by explaining that the town of Gumbo Limbo may never has existed, that it might be part of the myth that he (as third-person narrator) is about to tell us. Once that’s established, we find out that there’s this orphan kid, Liam, whose parents died tragically, so he’s shipped off to live with one of his father’s old friend, an apothecary, Murgen, in Gumbo Limbo. So many fairy tale conventions are present, all the first paragraph, including a magical setting, an orphan, and a kindly older caretake. Whatever happens after this has been well set up, as at this point, it seems like anything can happen.

And it does. Liam soon finds a creature washed up on shore, a tiny, aquatic thing that he befriends. Despite Murgen’s protests, he brings it back to the shop, puts it in a jar with some saline, and keeps it on the top shelf in the storeroom. Liam visits the creature, talks with it, considers it a boon companion.

At the same time, it starts to rain in Gumbo Limbo, raining so much and for so long, the town is threatened to wash away. This is seemingly unrelated to anything that’s happened so far, except a spiteful, evil young man named Tim Rutter, who works as Murgen’s assistant, comes into the story. Rutter, who is especially hateful and jealous of Liam, starts to spread rumors about the thing in the jar in the apothecary’s back room. As this is a small, seaside town, one that desperately needs it to stop raining, they are prone to such rumors, to such legends, to myths. Before long, Rutter gets the town believing that the creature in the jar is a mermaid, perhaps, or something similar, and its captivity in Liam’s jar is causing the floods. Before long, a committee—really, a posse/angry mob—is formed, an angry lot set on finding the truth. I.e., take Liam’s creature away, anything it has to to make the rain cease.

That’s a good chunk of the plot, but Booker’s story is more complex. This Rutter kid, the one who starts the rumors, has a history of his own, one that involves the “magical” impregnation of a local girl, a girl who miscarries. This seems like an innocuous detail, but Booker, a talented story writer, makes everything connect. The story is haunting, tragic, but full of love and hope and I enjoyed every single bit of it.

I’m really curious now as to what the other five stories in Are You Here For What’s I’m Here For? are like, as the two I read couldn’t have possible been more eclectic. Brian Booker has gobs of talent—I know that for sure—and I’m eager to delve deeper into his book, discover more of what he has to offer. 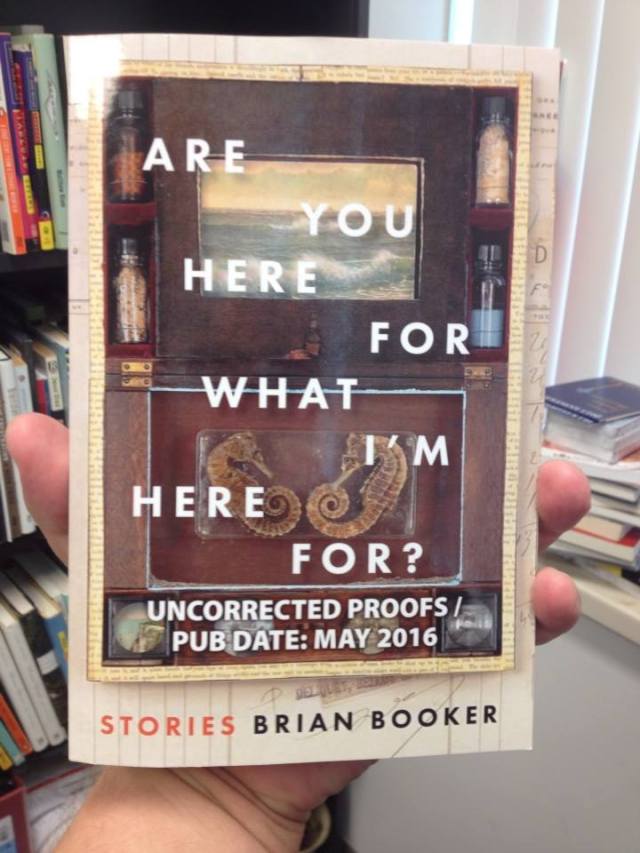