Happy Friday, Story366! This morning began a hectic forty-eight hours in the life of your short story blogger. As noted yesterday, Laura Hendrix Ezell is in town to give a reading and hang out with students. She’s visiting all my classes, talking about her awesome collection of stories, A Record of Our Debts, which won Moon City Press‘s Moon City Short Fiction Award. At the same time, Karen will be heading up to Kansas City for a reading, promoting her also-awesome poetry collection No More Milk. Somewhere in the midst of all this, we still have these two sons that need to get to and from school and eat and such. All in all, a fun day, but that’s just today. Tomorrow, me and the boys take Laura to the airport early, then have to pack up and go camping overnight with the Cub Scouts. That’s not normally a hard thing, only since Karen will be on her way to Chicago for two Saturday readings, I gotta take the three-year-old boy camping. He’s game for it, or at least he thinks he is. Who knows how sleeping in the tent in the middle of the woods is going to play once it’s happening? Regardless, by Sunday morning, we’ll be on our way home, as will Karen (albeit from much further away), and life will return to to normal. Living life, I like to call it, although sometimes I wish living life involved sleeping more than it’s going to involve this weekend.

For today’s entry, I read several stories from Douglas Watson‘s collection The Era of Not Quite, winner of a BOA Short Fiction Prize from BOA Editions. I like all the stories I’ve read, teetering between writing about the title story—”The Era of Not Quite,” about this guy who wants to ask a librarian out but can’t bring himself to do it—and the lead story, “Against Specificity.” As you’ve probably read the title of today’s entry by now, you know I’m going with the latter, so here we go, “Against Specificity.”

“Against Specificity” is a second person story, in the most basic terms, as it uses “you” as the main character, directing it’s narration at this pronoun. It’s a bit different than a lot of second-person stories I’ve read, that I’ve covered here on Story366, not really an imperative second person like a Choose Your Own Adventure novel or a straight-up second-person narration like an early Lorrie Moore story. It’s more of a hypothetical second person, I’ll dub it, a sort of royal you, as the narrator tells you that he/she wants Thing A but instead has Thing B. The story, from there, explains why Thing A is so great and why you wants it instead of Thing B, as well as what you has to do to swap Thing B for Thing A.

As you (random Story366 reader, not the character in “Against Specificity”) can probably tell, “Against Specificity” is a satire, something that pokes at human nature, our whims, our fickleness. And all of that is certainly true, right from the start, that first sentence that sets up the need for Thing A over Thing B. I love the concept, love the execution, love the story.

What really stands out about “Against Specificity,” however, is how long that Watson is able to maintain this premise, how long that we as readers are interested in this story, a story that, by design, lacks detail. We have no idea what the hell Thing A or Thing B (or Thing C or D or so on) is, but it doesn’t matter. Why? Watson makes his point. It’s not only satire, but a deconstruction of story and its elements. It’s less didactic and metafictional than, say, “Lost in the Funhouse,” but broken down to the bare bones of fictional elements nonetheless. I care about the narrator, you, and whether or not he or she was able to go down to the Thing Exchange and swap Thing B for Thing A. I care about her/his frustrating wait in the empty office before a representative would consider her/his case. I thought the bait-and-switch approach—offering up Things C, D, and so on instead—was amusing, poignant in a different way. And once a deal is finally struck, you safe at home and enjoying her/his bounty, I love the introspective, philosophical sidecut that Watson takes this story.

I’d not read any Douglas Watson before today, but I’ve been missing out. I read a handful of stories from The Era of Not Quite last night, then gobbled up a few more today, when I had some free moments. It’s a truly standout collection, in the vein of some of the great satirists and absurdists, writers like Vonnegut, Barthelme, and Coover, a collection I’ll certainly finish, go back to again. 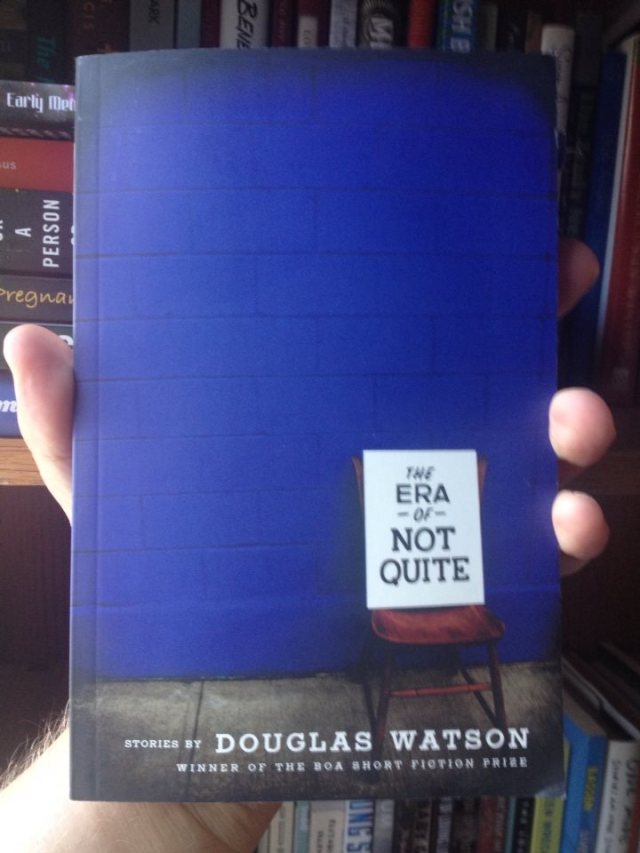