Hey Hey, Story366! In case you’re wondering, I’m not at Wrigley tonight, as I chose to stay in Missouri this time, having traveled the past two weekends. That’s worn on me a bit, plus I’ve gotten a tad behind in my duties as a dad and an English professor, so I decided to take a weekend off, hoping to have to make the journey this coming weekend for Games 3, 4, and 5 of the World Series.

And so far so good, as the Cubs are up 4-0 in the bottom of the fifth. Oops, make that 5-0, as Anthony Rizzo just hit an home run. Wooo! Still, I’m cautiously optimistic. I remember 2003—and if you don’t, you can look it up, as I don’t have the time to get into that here—how close they were in that Game 6, how I called my mom from Bowling Green, with one out in the top of the eighth, talking about the Cubs going to the World Series. They were up three at that point and then the bottom fell out of the world. So I’m not calling Mom now—not until the game’s over—as I’m already risking things by blogging for all you here. I feel good about you, though, Story366 readers. And as always, I’m aware that this isn’t posting live, which has to factor in somehow.

Today the family and I took a hike and then went to the train store (aka, Barnes & Noble) so we could poke around. While there, I picked up Alexandra Kleeman‘s collection Intimations, out earlier this year from Harper. I’ve had my eye on this book for a while, finally pulling the trigger today, and I’m glad I did. I read several stories while the youngest played with the free Thomas set, then another when I got home, and am going to settle on that home piece, “Choking Victim,” a pretty cool and intense story.

“Choking Victim” is about Karen, a thirty-two-year-old new mom, someone who’s having trouble adjusting, more or less, to her new reality. Told in third person, Karen is revealed to be a very introspective and lonely person, neurotic in most ways, worried that she’s not a good mom, worried because her daughter, Lila, doesn’t speak much yet, worried that she’s lonely even when she’s not alone. Kleeman’s paragraphs are long, investigating Karen’s psyche as she moves around her apartment, living her life, unsettled at every turn.

Things, plotwise, pick up when Karen thinks she hears her nosy and grumpy neighbor, Puldron, choke to death. Puldron is the guy who rifles through Karen’s mail out in the hallway, never hiding it, never apologizing, and Karen can’t stand him. But she hears his coughing fit through the wall, hears him gag, and puts her ear up to the plaster to figure out what’s happening. Everything stops and she’s convinced Puldron is dead. Her initial reaction is to get out of the apartment, to take Lila for a walk, so she gathers her daughter and their stroller, only to realize she should call an ambulance as she heads for the door. She has the phone up to her ear when she goes out into the hall, only to see Puldron out there, alive, looking through her mail once again. She hangs up and takes Lila for that walk.

Karen continues to be worrisome and contemplative on the walk, so it doesn’t help when their super-expensive stroller loses a wheel. She is in the park and can’t manage dragging the broken stroller and still carry Lila, so she decides to abandon the stroller, come back for it later. It’s a big decision, as she has a history of losing or destroying expensive things (there’s an anecdote about a pricey sweater), …

Okay, more on that later, or maybe tomorrow. I don’t know. No words I can come up with … But I’ve been gone from this post for an hour, going kind of crazy, but it’s time to finish.

So, as I was saying, Karen has a history of sixing nice stuff, so it bothers her that she’s left this nice stroller in the park. She’s in a café up the street, lamenting this, when she runs into a woman named Linda who seems to be her spirit guide, making her feel better about herself, her hesitations as a parent, everything that makes her so neurotic. Linda is such a relief for Karen that Karen decides to leave Lila with her so she can go fetch the stroller. And this is where the story really gets intense: Karen has just left her baby with a stranger in the middle of a city.

I don’t want to go much further into the plot of this story, but on the other hand, I kinda want to. The ending pays off the checks Kleeman’s intensity has written, especially if my interpretation of the story is right on. What’s that interpretation? Well, that would be giving too much away, so I won’t. I hope that some of you track this story down—heck, here’s the link to it at The New Yorker—and you can let me know in the Comments section. I’ll also give it to my students to sort out, to confer with. But I’m confident.

I should note, before I go drink my ass off and watch tonight’s game highlights over and over, that “Choking Victim” is a different story from the others I read in Intimations. “Choking Victim” has a more traditional narrative arc, and even if you factor in my interpretation/theory, it kind of stands out (which is maybe why I chose it). Other stories in the book read more absurdly, more surreal. I liked those stories just as much, perhaps even more, especially the (mostly) title story, “Intimation,” which is about doors and cake-baking (sort of). So, Alexandra Kleeman has range, but mostly, she’s just good at this. Glad I picked this one up. I’m going to read more. 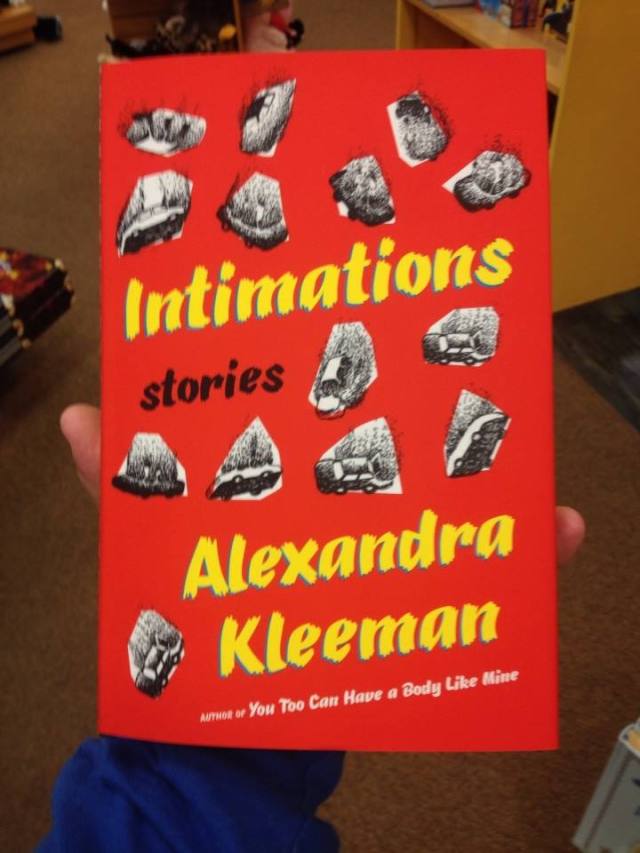