Happy Friday, Story366! Okay, today might be the last post that focuses its intro part squarely on the Cubs. The World Series has been over for two days, the Cubs have won it, and while I feel fine about spending so much focus on a non-story-related topic—it’s my life, my blog, after all—I think enough might be enough. I could surely go on and on about free agency, the trade market, and post a daily countdown until pitchers and catchers report to Spring Training, but nah. On Monday, I’ll be starting the long-promised second Bowling Green week, focusing on books and authors from my MFA alma mater (I have thirteen books saved up and just ordered a fourteenth, so it looks like I’ll have two more weeks dedicated to Falcon fiction instead of one). Before that, I’ll be heading to camp with the Webelos this weekend and will surely have things to report on concerning that adventure. More than anything, I kind of look forward to getting back to making up my intros, having to find something to write about every day. Haven’t done that for a while, like a month, and as we head down the home stretch here at Story366, I want to make sure I exhaust my ideas.

For today’s post, I read from Britt Haraway‘s brand-new collection Early Men, out from Lamar University Literary Press. I published a short of Haraway’s in Moon City Review last year, so I was a tiny bit familiar with his work (it was a one-page short, so literally, a tiny bit). This collection had also been up for consideration for the Moon City Short Fiction Award before it was snatched up, so I’d made myself even more familiar with what he does. Still, it was nice to read some more stories from the book, including the semi-title story, “Lucy and the Early Men,” about an archaeology grad student who realizes—because everyone he meets tells him—that he’s in love with his best friend (among other things). I do like writing about title stories, but truth be told, the story that has stuck with me since I read last night is “Germantown Players Club,” so I’ll write about it instead.

“Germantown Players Club” is about this guy (unnamed—a lot of that going on in the stories I’ve been choosing lately), a middle school teacher who is housesitting with his wife, Magda, in what’s essentially a mansion, one that belongs to the principal at his school and his very successful doctor wife. He, we find out in the first sentence, is a complainer, as the story starts with him complaining how hard it is to have sex with his pregnant wife in the giant, fancy shower of this  giant, fancy house. This sets a tone for the story, as this guy cannot narrate without finding the worst in everything he does, criticizing every aspect of the house, of his house-sitting situation. He spends a long time pointing out how much better these people have it than he does—they have expensive tropical fish and more garage doors/slots than they do cars—and we get the idea that he’s not so happy with his lot in life.

The story isn’t all that long and comes to a head pretty early when our guy is out checking the mail and he runs across a magazine meant for an obstetrician and starts reading it right by the mailbox (the neighbor’s driveway is adjoining, so the mailboxes are as well). He finds an interesting article about baby cell generation that captures him—Magda’s pregnant, after all, so along with complaining, he’s been doing his homework. Of course, the owner of said magazine, his principal’s neighbor, pulls up and wants to know who our guy is and why he’s reading his mail. The two have a detailed debate—and our guy holds his own, against a doctor. He can’t let it go at that, however, and is soon no longer merely discussing science, but is in a full-out fight. Near the end of it all, the doctor grabs his medical magazine and when our guy reaches into his car to grab it back, the doctor slams him in the face, ending the argument pretty quickly at that point.

There’s more to the story than that, more to our protagonist, including a major backstory point that perhaps explains this guy, but I won’t go any further, won’t spoil it. As much as I like themes for this project, I’ve shied away from politics—it’s making me ill at this point—but the protagonist in “Germantown Players Club” is a socialist, through and through, and had he been invented in 2016, would have been wearing Bernie T-shirts, buttons, bumper stickers, and underpants. That’s not apparent early, not until the argument with the doctor in the driveway. Healthcare, and who gets to have it, becomes the heart of the issue, and is related to that backstory point I referred to in the previous paragraph. All of sudden, our protagonist started making more sense, as soon as he had a focused target for his frustrations.

After reading three stories from Britt Haraway’s Early Men, I’ve picked up a couple of patterns. Haraway likes to create fringe characters, characters on the brink of things falling apart, then depict the scenes where things fall apart. He highlights them with tense confrontations, interactions that reveal the inner truths of his people. “Germantown Players Club” features two such confrontations, the one out in the driveway with the doctor, and another right after, making it, at seven pages, intense from beginning to end. I like this story a lot, like what Haraway does. This is, as they say, a solid debut. 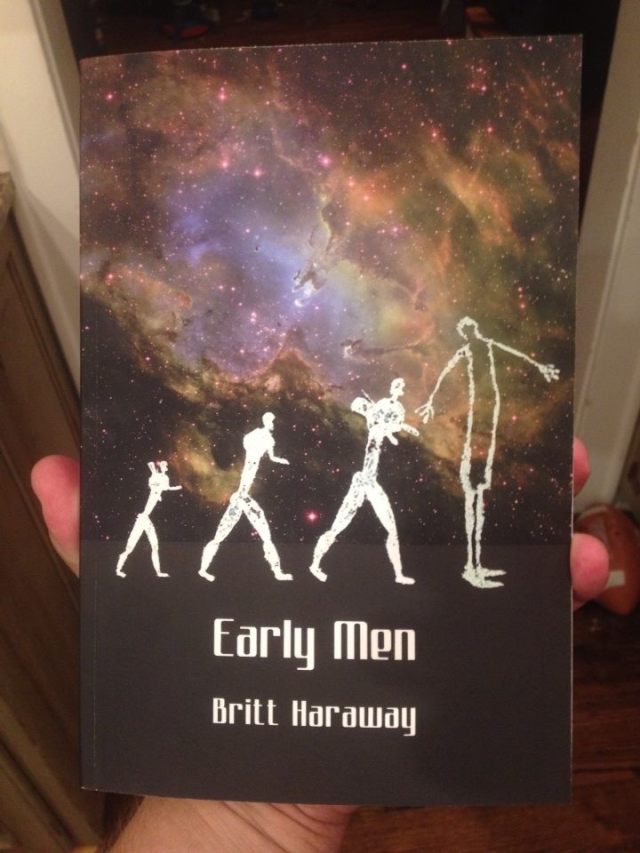 what i hold significant

FRONA'S READS OR ELSE
Fiction and History