Happy Thanksgiving Eve, Story366! Okay, so that’s not a real thing, but if I was ever going to use that as a salutation, today is the day. Today, me and the family shopped, dropping a week’s worth of grocery money on this meal, and while we’ll get more than one meal out of this bounty—we may well get a week out of it—the fact that we spent like forty bucks on mushrooms and other ingredients for this special stuffing isn’t lost on me. But we have this stuffing every year and it’s fabulous and I’ve thought about marrying that stuffing and it’s really delicious and it has four different kinds of mushrooms in it and and we’re going to make it in the morning and I wish I was eating it right now.

Since I’m not eating it right now—and no restaurant in Springfield serving it—I did distract myself for a while by reading Brett Ellen Block‘s collection Destination Known, out from the University of Pittsburgh Press as a winner of their Drue Heinz Literature Prize. The title story of this collection actually appeared in Mid-American Review when I was on staff, serving as an assistant editor, under the Rebecca Meacham regime. I reread “Destination Known,” immediately recognizing it, remembering its plot, its tone, and I know I haven’t read that story in, like, eighteen years? Weird how I can remember something like that. Sure, I’d probably read it a few times for our editorial meeting, perhaps proofing it, too, but still. I wonder if, in eighteen years, I’ll remember all 366 stories I’ll write about this year. It seems like I should be able to, seeing as how I write an entire essay about each. But I’ll guess we’ll have to wait and see.

I read a couple of other stories from Destination Known and see some reoccurring themes in Block’s work. Her stories seem to be about mostly normal people who find themselves on the fringe,  doing things they might not normally have done, dealing with people they have regularly tried to avoid. But Block places these characters on that day, the day they cross over into a more desperate state. In “Destination Known,” the protagonist watches someone dig dinner out of a Dumpster, then chases down a woman who hit-and-runs a parked car, her life leaving her in a state of nothing left to lose. Another piece features a woman stealing her boyfriend’s car, just to teach him a lesson, only to have that go horribly awry. The story I’ll talk about today, “For Sale by Owner,” fits this theme as well.

“For Sale by Owner” is about this fourteen-year-old kid who lives with his mom and mows lawns as his summer job. He and his mom have been hosting his deadbeat Uncle Ray for a couple of days, which Ray has spent either asleep or in the bag. His sister has given him time to settle down, then clear out, and at the end of that two days, is AWOL, his things in a box in the kitchen. That’s when the family gets a call from the local grocery store that Ray is passed out in his car in the parking lot. The protagonist thinks they should go get him, at least give him his stuff, while his mom doesn’t really give a shit, as long as her brother Ray doesn’t come back.

Our protagonist decides to walk down to the store and help his uncle. There, he runs into his best friend, Pablo, who’s sitting on the hood of Ray’s El Camino, watching him either sleep or rot—it’s unclear if Ray is even alive. They eventually wake him and Uncle Ray has a mission for them, not really concerned that his nephew is there, is expected back at home, or that all his earthly belongings are in a box in the kitchen. Uncle Ray’s friend has a Craftmatic bed and Uncle Ray needs help loading it into the Camino. Our protagonist is a pretty trusting kid, one who takes this family bond seriously, so he agrees to help him, dragging poor Pablo along with him.

It’s not long into the bed pickup mission that it’s clear that Uncle Ray is stealing this bed, not picking it up from a friend. Uncle Ray’s buddy lives above an abandoned dog groomer in a building that’s barely standing, one so strewn with trash, rubble, and vermin that our protagonist and Uncle Ray have to dig a path to the bed. Taking it out is a challenge, as the bed is heavy and it barely fits through the door and out the hall, plus our guy thinks he sees a little girl at the apartment across the hall ready to call the cops. As they move the incredibly cumbersome bed down the rickety stairs, ….

I should stop there as some serious stuff happens at this point and I feel like I’d be giving too much away if I revealed it. The story doesn’t end once we leave the dog groomer building, either. There’s still another mission with Uncle Ray, but again, you’ll have to find that out for yourself. To note, in “For Sale by Owner,” and all of the stories I’ve read by Brett Ellen Block, characters don’t necessarily find answers at the end of their adventures, nor do they even find the adventures’ ends. As much as Block finds the right day, the right moment to start her stories, she’s not in any hurry to get her characters out of these predicaments, either. Block places us in these moments and keeps us there, watching as her characters work their way into some precarious situations, suspending them in states of indecision, desperation, and confusion. Her stories are about simple people and somewhat simple situations—if stealing an automatic bed is simple—but maximizes everything into great fiction. She has the skills to tell stories just as they should be told. Destination Known is full of them. 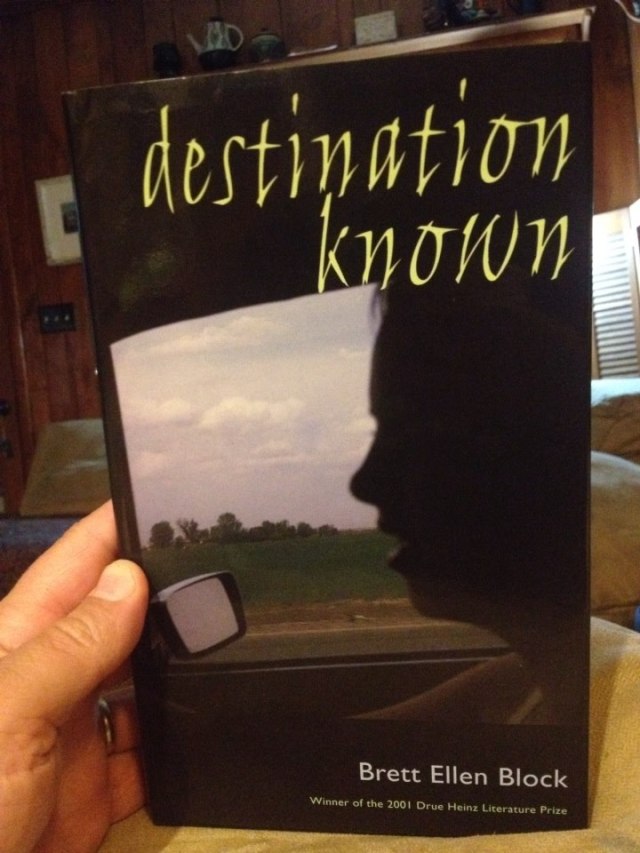