Merry Christmas Eve, Story366! And Happy Hanukkah, too! What a day it’s been! Last night after my kids went to bed, I did some last-minute shopping (always good to be in a Walmart at 1 a.m.) and then some last-minute wrapping, all while watching this season’s premiere of The Walking Dead (I’d just caught up). Not exactly how I remember my parents doing it, but then again, some other store substituted for Walmart and I’m sure they watched some late-night TV show instead. Maybe my experience was more intense than Sears and Johnny Carson—that Walking Dead season opener is brutal—but that’s a small detail. Tons of parents out there did the same last night and are doing the same again tonight. I know I won’t be in bed for several hours, that very early wake-up call looming as soon as my kids smell daylight.

Today, we readied things for a nice Christmas Eve dinner that included a new family tradition: enchiladas and quesadillas. Karen and I discussed things early yesterday, tried to decide when we’d do the big dinner and what we’d eat and decided on some prime rib for Christmas Day. That left tonight open, and what I make that Karen likes more than anything are enchiladas, so I made enchiladas. The kids like quesadillas, which are just flat, cut-up enchiladas, so they’re not any harder to throw together when I’m already making enchiladas. Karen also got some pre-cooked, monstrous shrimp that we gnoshed on while the chicken cooked (I used crock pots so it would shred). So, no Polish sausage or pierogi or any of those things I grew up with, but that’s stuff is a lot harder to make and like I said, Karen likes the enchiladas. By the time we ate—after 9 p.m.—we were so filled from shrimp and snacking all day, we each ate some rice and barely an enchilada each. We now have eight full enchiladas in the fridge, which we’ll have to work around a pretty massive prime rib.

I’ll also predict, unless there’s a story coming in the next week about enchiladas, that this is the Story366 post that will feature the word “enchilada” more than any other. Anyone want to take that bet?

For today’s post, I never rallied and found a holiday story to write about, so instead I read from Marisa Silver‘s collection Babe in Paradise, out from Norton. Babe in Paradise is one of those books I came across in a box in my basement last week, a book I remember having bought a long time ago and then losing track of; it’s one of those that spurred Story366, those collections I’m so glad to have unearthed and enjoyed, one I probably never would have gotten to without this blog. I read a few stories and thought all of them were pretty intense, about people experiencing a life-changing incident while already dealing with some other life-changing incident that’ has been fucking with them for a while. The title story, for instance, features a sixteen-year-old girl named Babe whose house is about to be eaten by a wild fire just as she’s trying to figure out her sexual relationship with this older guy who works (and lives) in a Goodwill donation truck —it’s really about coming to terms with her own sexual identity after being abused as a kid. “What I Saw From Where I Stood” has a similar structure, and is a little (an eensie-weensie little) less depressing on this fine holiday evening, so let’s hit it.

“What I Saw From Where I Stood” is about this young couple who at the start of the story is driving home from work through Los Angeles when they are crashed into from behind by a van. Dulcie is the driver, but the story is told by her unnamed husband, technically the protagonist and narrator. Thinking it’s just an innocent accident, our guy gets out of the car to access the damage and confront the people in the van, only to find out they’ve been crashed into on purpose and are being robbed and eventually carjacked. The couple is happy to have escaped the incident with their lives—the whole thing happened at gunpoint, there were six guys, all of whom were whacked-out—but then, of course, the reality of having this happen sinks in for them pretty quickly in a lingering way: In short, it sucks.

The event has a profound effect on Dulcie, making her afraid of opening her door (Halloween happening that week is not much fun), sleeping with the lights off, or even going to work. The story started sounding a lot like the story I wrote about for yesterday, “The Burglar” by Mary L. Tabor, which features a home break-in and a woman who can’t get the incident out of her head. “What I Saw From Where I Stood” is a different story very quickly, though, as other variant things are going on for Dulcie and our protagonist. Mainly, they’re still getting over the loss of their baby from a few years prior, a pregnancy that saw massive complications at six months, induced labor, and a stillbirth. I should also mention that the carjacking at the outset of this story happened right in front of the hospital where they lost their baby. Is that a coincidence? In the real lives of these characters, sure, but in the world of short stories, no: Silver has set up a nifty metaphor here, one that drives the rest of her story.

While the robber and carjacking occupy this couple’s minds, at least for now, our narrator can’t shake memories of his baby’s death, which he relays quite often through backstory. Sure, being robbed at gunpoint, having everything valuable being forced from you, is kind of like what happened to Dulcie and the baby, but really, the crime that begins the story falls into the background and thoughts of the baby’s death, how’s it’s shaken their foundation, start to play a larger role. There’s also a sub-story and lesser metaphor about a rat in their apartment’s wall, but really, I’ve given a lot away and don’t want to reveal anything further, so I won’t.

I really enjoyed Marisa Silver’s approach to story, how there’s a plot and then there’s a backstory plot, each overlapping with meaning and images and language and metaphor. To oversimplify this work and say an armed carjacking is like an induced stillbirth, or a creeping wildfire is like one’s sexual history slowly catching up with you, burning you as you try to escape it, would be unfair to Silver and her talent. It’s easy for me (especially 358 days into this) to break stuff like this down, but Silver’s stories flow well, are fantastically written, and don’t broadcast these conclusions at all. I was compelled by the characters in and impressed by the intensity Silver is able to reach and maintain. Some great incident befalling a person as they’re already dealing with some other shit is a savory recipe for great fiction. Babe in Paradise is Silver’s first book, of six, including four novels and a second collection, and I’m curious to see what else she does. I enjoyed this enough to most certainly want more. 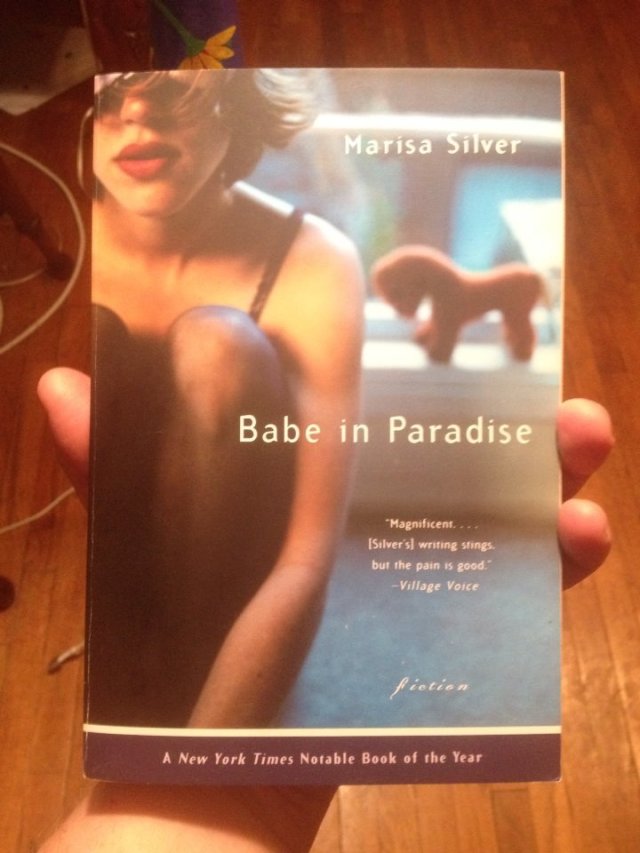