Happy Monday, Story366! It’s nice to start off the week with some reading and blogging, as that’s the great advantage of summer. Hard to believe I’ve been done with that spring semester for a month now. Part of me is tempted to look back and evaluate what I’ve accomplished in the past month, but part of me knows, from experience, that there’s not a whole lot of good to come from that. I’m pretty sure most academic-types have grand plans for summer as they turn their spring grades in, plan to write seventeen novels and a bunch of stories, lose twenty-five pounds, and get their house in to having-company-shape, all by the end of May. It never really works out like that, not for for mere mortals like me, anyway, so I look at the small victories. Writing this post, for example, is more than a small victory, as I love doing these, but I don’t necessarily have to. I could be doing anything else right now, including sleeping or watching television. I’m not, though. And that’s a victory. After this, I probably will nap. And I might work on a story. But no matter what, I’ve done this. So, I salute you, summer, for both giving me the time to do great things and making me feel awful about it when I don’t.

I had a tremendous Father’s Day weekend to boot, as the boys (via Karen) got me and everyone a family pass to the Wonders of Wildlife, this giant new aquarium right here in Springfield, Missouri, part of the enormous Bass Pro complex and headquarters just a couple of miles from our house. We chose to visit on Saturday, even though we knew it would be crowded, but we were excited to see what was up (they’ve been building this attraction since before we moved here six years ago). Like with my story reviews here on this blog, I don’t want to give much away, but I will say that the aquarium lives up to the hype: Me and the fam had a great time, and tomorrow after school, I’m taking the boys back for another trip. Springfield doesn’t have a lot to offer out-of-towners in terms of attractions, but this jumps to the top of the list: I can legitimately say that it’s worth traveling here to visit this place. Happy Father’s Day, indeed.

Back to the blog, though. Today I read the first few stories from Gabriel Houck‘s new collection, You or a Loved One, just out from Orison Books as the winner of their 2017 Orison Fiction Prize. I hadn’t read anything from this press before, but I have read a few of Houck’s stories. One piece I read was in Mid-American Review a bit ago (I still get that mag!) and another (though this one not in the book) was in Moon City Review 2015. Obviously, I’ve liked what I’d seen, but it was nice to sit down with a whole collection, read a few in a row, see what Houck really does.

“You or a Loved One” is about Belle, a crisis center phone operator who is, more or less, skimming along the surface of her life. She is forty years old and has moved across the country, away from her eighty-something-year-old parents, just to avoid them, be alone. She feels comfortable lying about her situation, insisting she’s been dating a wonderful man and has all kinds of gallery shows for her paintings, what she went to school for. She hasn’t painted in years, and her current boyfriend, twenty-five-year old Nick, has unique designs on what constitutes monogamy. She posits that she could still have a happy, nuclear life, complete with normal relationship and kids, but also admits that this window is closing, that it “… feels like a shuttered part of a shuttered house from which I’ve long since moved away.” So, Belle isn’t particularly happy, and knows she can do better, but isn’t the type of person who does.

The one human contact that she’s still fully invested in is her younger brother, Kip, a grown man with Aspergers (though they didn’t know that until he was grown), who calls Belle regularly, whom Belle even calls back. Belle still keeps herself isolated enough, though, as she never answers her phone, just listens to Kip’s messages on Voicemail, then returns his calls when she knows he won’t answer, so he can experience her second-hand as well. And this is who Belle is: A buffer between her and anyone she can get close to: The physical distance between her and her parents, the voicemail deal with Kip, the age difference with Nick, and the phone relationship with her clients at work. Belle won’t let anyone close to her, not physically or emotionally, which is some pretty great characterizing by Houck.

All this is happening with the crisis center in the backdrop, where Belle genuinely excels. Her boss, Raymond, calls her in, about halfway through the story, to tell her that she’s doing a great job (calls are monitored for quality assurance, don’t you know). He wants to promote her to the rank of Diamond associate, even though a counselor is supposed to be with the company two years before reaching that rank and Belle isn’t near that time. What this means is, Belle is going to move from simple, non-emergency cases like the woman who hears a dog barking in her house (her dog has long since died) to serious emergencies people at the edge of death, callers in dire situations with only one person to turn to, using their personal crisis call-in device (like the kind we see on TV: “I’ve fallen, and I can’t get up!”). All of a sudden, Belle’s finds herself in a much higher level of human contact, and dependency, than she’s comfortable with.

And that’s as much rundown as I’ll give on “You or a Loved One,” as any more would give away the super-special twists and details that make this story such a delight. Houck has a knack, it appears, for depicting marginally odd protagonists, seemingly normal people with just enough quirk to make them interesting, to make them story-worthy. Belle in today’s selection is probably like a lot of Americans, someone who just wants to do her thing and otherwise be left alone, only it doesn’t work that way, not when people love you, want to interact with you out of genuine human compulsion. The teenaged kid in “The Dot Matrix” only wants to fit in, have the same pinup printout that every other kid in his grade has, even if it means giving up the safety of his D&D game for a bit. And the Spider-man actor in “Hero’s Theater” just wants to play Spider-man, at the Celebration Station, but is bitter he has to go to someone else’s house, play it by their rules. Gabriel Houck’s protagonists, from what I can tell, just want their vision of the universe to be the norm, to keep doing their thing, keep coasting from one day to the next as they bask in the intricacies of life they have grown to enjoy. Conflict arises when everyone else prevents them from doing so, leading to some pretty great fiction. It also makes You or a Loved One an impressive debut collection, one I recommend. 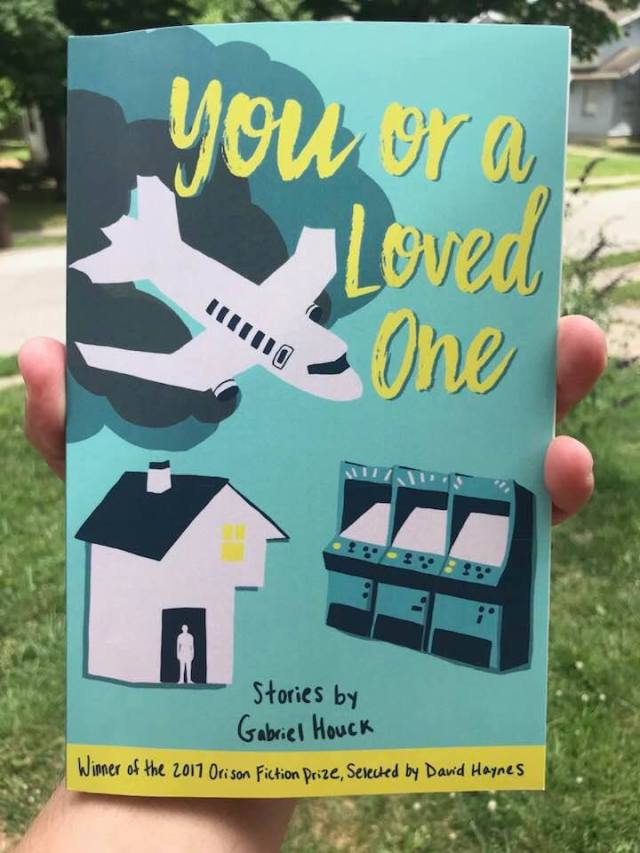