Today’s main mission was twofold: Get the older boy off to the junior high Valentine’s dance at his school and make a Pinewood Derby car for the younger boy.

The dance was pretty easy. There was a little resistance to putting on clean clothes—matching pizza sauce stains adorned his daytime T-shirt and jeans. Once we got him into something nice and had him comb his hair, we had a ladykiller on our hands. It’s truly great our boys look like the Karen, because really, I’d feel horrible otherwise.

The Pinewood Derby car was harder. We blew several chances to have someone with real tools—like a table saw—cut our car for us, but failed at all of them. I even had a phone number for a guy who supposedly loves this kind of thing, will help you make a car, make a winner. His number was disconnected. I thought about just buying a jigsaw, and in fact, Karen and I stopped at the Sears liquidation sale (RIP, Springfield Sears) to see if they had one left and for cheap. They didn’t. I was ready to run out somewhere else to buy one then remembered Karen may have bought me one years ago and I never used it—I was right! We had a saw, and as soon as the older boy was off breaking hearts, we set to cut the car.

Funny thing about having a jigsaw and a thick block of wood and nothing else: You can’t cut a loose piece of wood with a jigsaw. Lo and behold, the saw included two clamps. We were again saved! We tried the clamps, but they barely fit around the block. The only thing that we could clamp the block to was the open drawer of a metal filing cabinet. Again, on our way!

Only the clamps didn’t really hold that well. Still, we figured it out, cut most of the car and … found out the blade—the jig—wasn’t long enough to cut through the whole block. We had to turn the car over and cut the other side … only there was no real way to match it up, meaning the cut lines on the opposite sides were uneven.

After about an hour of repositioning the block with the clamps and failing, we took the mangled piece of wood and cut the rest of it with a coping saw, leaving a jagged, uneven mess. Another hour of sanding led to something resembling an adult effort—on a child’s project—an adult effort that has a coat of primer on it and is drying on the front porch.

For today’s post, I read from a book that came in the mail today, Valerie Vogrin‘s things we’ll need for the coming difficulties, fresh out from Willow Springs Books as winner of their Spokane Prize for Short Fiction. I’d never read Vogrin’s work before today, so I was eager to see what she was all about.

I started with the first several stories. The first, “The Next Thing: A Story With Chorus,” is a great piece about a woman named Regina who goes on a road trip. Her husband’s just left her, and really, she just wants to go. She heads toward St. Louis, where she knows of a guy who once hit on her at a conference—that’s her whole plan. A series of events, or next things, leads her to a situation that she never could have imagined for herself, yet there it is, cleverly reached by Vogrin’s playful narrative structure. I read a couple of shorts, then also really enjoyed “The Girlfriend,” about a zoology researcher who can’t shake her reputation as the woman who got famous jerking off turtles. Both of these stories place their protagonists in uneviable but unique situations, making me really like what Vogrin had to offer so far.

I ended with the coda story, “things we’ll need for the coming difficulties,” a story I thought was the best of the bunch (and yes, this title’s always written without initial caps, mimicking the diary where the phrase is first written). This is the story of Shay and Mason, a young couple who have survived some undescribed apocalypse/alternative future meltdown. They have done so because they planned for it—the kind of people we call “kooks” when we see them now—the people with endless supplies locked in their basement, everything they’d need to die of old age in a bunker: medicine, tools, water purifiers, seeds, guns, you name it. In fact, Mason, a carpenter by trade, has built their house into the side of a hill, five feet of earth above them, their door only visible from a certain angle, hidden from the main road. It’s not clear at the start of the story how long they’ve held out so ar, but at one point, it’s noted they’ve not seen another human for over a year. Shay and Mason are solid survivalists, good at what they do.

Early in the story, Vogrin includes a lot of lists, which I inferred to be from Shay’s diary (if Shay wrote of herself in third person, anyway). There are the lists of things they’d need, things she’d not want to live without, the kinds of lists these types of people make when they become this type of people. Soon Vogrin takes things deeper, Shay questioning her life choices in these lists, especially that of Mason: Mason’s a provider and a builder and the perfect survival partner. But does she love him? Does that matter any more? Shay has all the time to think about these things between farming and canning, Mason often locked in his workroom, building this and that. The story dips into Mason’s point of view several times, but on the whole, “things we’ll need for the coming difficulties” is Shay’s story.

The inciting incident in the piece comes in the form of Wayne, an ex of Shay’s from grad school. How did Wayne find them? they both wonder when they’ve worked hard not to be found. Wayne did, however, as he’s survived himself. And he’s shown up with a van full of cheese and booze—there’s at least a couple of reasons the couple invite Wayne to stay with them, but of course, one really, really good reason not to.

Eventually, the story comes down to the incredibly simple question of what Shay wants. She’s so safe with Mason—she can trust him, even if she’s not madly in love with him. But is she in love with Wayne? He is exotic (he fakes several accents but is from Puget Sound), passionate (cheese, wine …), and like her, speaks and translates Spanish; they are a good match. Wayne’s sudden and bizarre arrival only fuels the scribblings in her notebook on the nature of living, of want and desire.

Vogrin does a nice job with bringing this story to its proper conclusion, which I won’t detail here. It’s not what I thought would happen, not what I guessed, though I was invested enough in the story to the point I wasn’t ever thinking about it. Really great story, though. I loved this piece.

So, my introduction to Valerie Vogrin was a good one. In things we’ll need for the coming difficulties, she has the undeniable ability to draw an interesting character and then place her in clever, tense situations, situations her talent as a writer executes with precision and style. So glad I responded to a query about this book as now I know about another talented story writer in our world. 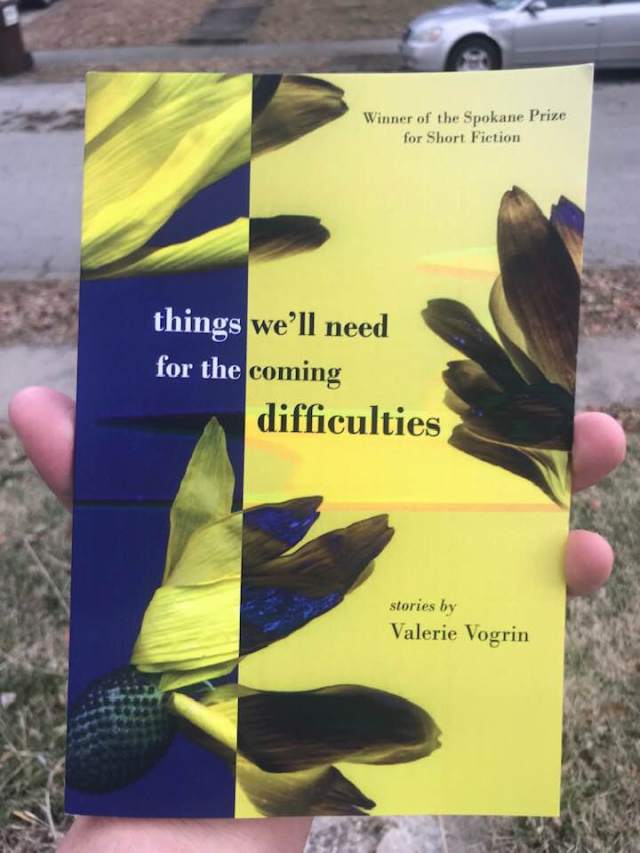