Yesterday, I found out that Moon City Press‘s distributor, the Chicago Distribution Center (CDC), has been closed down as part of Illinois’ social-distancing order. I think this is a fantastic idea, forced social distancing, and I stand by this decree. However, it does mean that no Moon City title will ship, when ordered, until the order is lifted, which right now stands at April 9. I do believe that anyone who is ordering books at this point has to know that the mail, and mail-order items, are going to be put on hold. At the very least, they shouldn’t be surprised by it if it’s their first encounter with such an inconvenience. Since we don’t deal in things like medical supplies, food, diapers, or other essentials, two extra weeks to wait on a book is no big deal, right? I do think it’s going to be longer than two weeks—at least it should be—but still. People will get their books, the press will survive, and all of this pales in comparison to the things that are really important out there, like all those warehouse and shipping employees staying safe.

Concerning this matter, my heart does goes out to Pablo Piñero Stillmann, whose debut collection, Our Brains and the Brains of Miniature Sharks, was supposed to come out on April 1. Pablo just had his big (soft) release at AWP canceled because of all this. We moved on from that, and I literally promised him that we’d make it up to him. There’d be other readings/events, a big splash for the actual release. Now this. So, if you like great stories—and you being on this page tells me that you do—click here to pre-order a copy of this fantastic new collection. The release date is now May 15, but we’ll keep you posted.

With that in mind, on to the story.

For today, I read from Hadley Moore‘s 2018 collection, Not Dead Yet, out from Autumn House Press as winner of their 2018 Fiction Prize. I’d not come across Moore’s work yet, so without further ado ….

Lately, it seems like I’ve been reading a lot of collections of linked stories. And if the books haven’t been specifically linked, they’ve been thematically consistent, really feeling like books that were written as a project. Daniyal Mueenuddin’s book, which I covered yesterday, is just a recent example; though just a few days ago, I guess I did boast of Peter LaSalle’s eclecticism. Moore’s work is more in the vein of LaSalle, I guess, as I really enjoyed reading different types of stories here, featuring different types of characters.

I started with the opener, “When My Father Was in Prison,” from the POV of a nine-year-old boy whose father is in prison (she delivers what she promises …). The story is told in short, poignant vignettes and focuses more on the kid’s obsession with his brother being gay than his dad being in prison. I liked how tight the language is in this story, forced by the vignette format, also mixing humor with the tragedy and awkwardness of the situation.

Next up was “The Entomologist,” about a retired bug professor who has termites eating her joists and hippies growing efficient vegetables in her back yard. I liked this story, too, the irony of a woman having so expertise in an area that’s systematically destroying her.

After, I skipped ahead a bit to “Baby True Tot,” about a woman in a mental health facility who buys an expensive, creepy doll to replace her dead cat. The story fences the POV between this woman and a younger man, also committed to this facility, who takes a special shine to her, though not the doll.

“Not Dead Yet,” our featured story today, is about Dean, an elderly black man whose wife has been diagnosed with cancer. That’s a pretty commonly told story, but the trick is this: This woman, Loraine, is Dean’s second wife, and his first wife, Marie, has already died of cancer. In fact, Dean met Loraine at a survivor’s meeting, Lorraine also having lost her husband. Lorraine, like Dean, is black, and both of their deceased spouses were white (though I’m not sure this has any bearing on the story).

So, this is a sad piece, highlighting just how shitty life can, how randomly unforgiving. Moore wisely doesn’t write about the trials and tribulations of Lorraine’s cancer, though. The story really happens right after she and Dean find out, when they get the grave news that Lorraine has, at most, two years. Dean starts to do the math in his head: There’ll be so many months of semi-normalcy, so many months of more serious illness, a period of decline, and then a month or two of just awful dying. Dean’s been through this. He knows what’s coming. And so does Lorraine.

It’s at this point that Dean starts to consider: Hey, instead of going through this again, seeing another life partner suffer and disappear, wouldn’t it be better if were to die instead? It’s not just a passing thought, either. Dean starts imagining what would happen if he suddenly had a heart attack. How would Lorraine endure? Does it matter, because he’d be dead? It’s a pretty stunning moment for a character in a story, to shift so drastically to survival mode (ironically) at a point when someone else needs him so much. You kinda can’t blame the guy for thinking it, all he’s been through. Maybe it’s a reaction, even a defense mechanism.

The story, which is only six pages long, takes another twist, once Dean has established, in his head, that he wants to go first. I won’t reveal that here, but it’s a touching, quiet ending, much in the spirit of the rest of the story. I liked this story a lot, a fine cap to my afternoon’s investigation into Moore’s debut.

So, a nine-year-old boy, a retired biology professor, a mentally unstable older lady and her young suitor, and an elderly black man. None of these profiles describe—physically, anyway—Hadley Moore. What I’m saying is, Moore has the chops to write outside herself, to investigate different characters, different storylines, even different lengths and styles. I enjoyed Not Dead Yet for this reason, each story unique, and each story well crafted and engaging. I’m impressed. 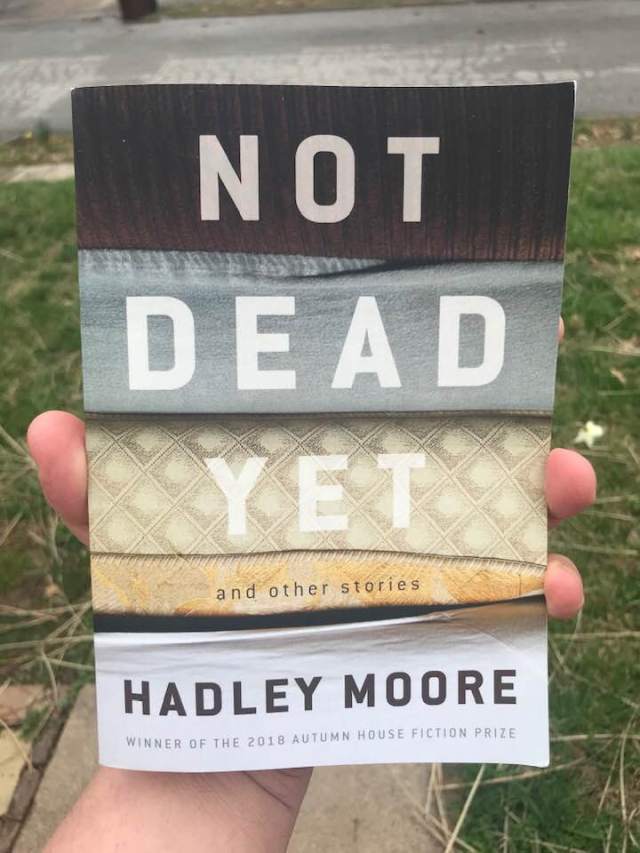