Happy May the Fourth, Story366!

In case you’re wondering on my physical state after yesterday’s physical collapse: I pulled through. After a ten-mile hike, I was a little sore today, but nothing a couple of Advil, a couple of times over, can’t fix, right? I remember shifting in my sleep once last night and every bone in my lower half cracking at once (which actually felt really good), chasing a cat out of the bed and downstairs. I even made some attempts at exercise today. Attempts, yes. All in all, a good time to catch up on grading, online lecturing, social media, and staying perfectly still. Just five more days until the next ten-miler. I think by then I’ll be ready to go. If not, I’ll go, anyway. Then I’ll have even more to bitch about in next week’s posts!

Today I very much enjoyed reading from Sara Lippmann‘s collection, Doll Palace: Stories, out in 2014 from Dock Street Press. I’ve read Lippmann’s work in journals before, but am glad to have a whole collection on hand from which to read. She and I will be teaching an online flash workshp for SmokeLong Quarterly this summer, and the better I am acquainted with her work, the better, right? So, yeah.

The opening story in Doll Palace is “Whipping Post,” about a fourteen-year-old girl whose  older sister lets her hang out with her and her friends, smoking pot and drinking beer. When the girl, Lizzie, gets even further into adult pleasures, almost in competition with her sister, the story becomes about more than just coming of age.

I really love “Target Girl,” about a girl whose dad is a professional knife-thrower. She—you guessed it—serves as his target, the girl in the pretty outfit who smiles as knives bear down at her, left and right, up and down.

“Reunion” depicts the reunion between a woman and a guy she had a threeway with once, in an elevator, twenty years prior. This time they meet on a playground, both of them with kids in tow.

“Human Interest” follows a reporter on her first story, profiling a pin-up photographer—the kind who takes pics of topless woman on motorcycles—in his trailer out in Jersey Shore.

All of these stories involve women out of place, women facing situations they aren’t used to or comfortable with. At the same time, it’s nice to see the women exert some power in these tales. Carey in “Reunion,” for example, has the upper hand in a lot of ways. The guy she reconnects with doesn’t remember her name and looks ridiculous, wearing his daughter in one of those baby holsters, looking like a dweeb when he suggests they “hang out some time.”

All of this makes “Doll Palace” as good a title story as any—especially with the double-implication of “doll.” This one features Frida, a mom at a doll-store birthday excursion with her daughter, niece, and niece’s babysitter. Frida absolutely hates this place, the Doll Palace, basically a stand-in for the Great-American Girl stores that I, too, have ventured to with a niece, over in Water Tower Place in Chicago. Frida is a strong woman, a self-described (more than once) feminist, and for her to be stuck in this store, allowing her daughter to be so obsessed with these products, is an affront. And she’s in a bad mood about it the whole time.

Adding to her consternation is Shannon, not her niece’s mom, but her niece’s babysitter. Her niece’s actual mom, Jackie, is the sister of Frida’s ex, but before that, before Jackie married Daniel, they were best friends, college roommates, inseparable. Now, post-divorce, the two have grown apart. Frida is absolutely convinced Jackie has set this whole thing up to spite her, knowing she’d be sending Shannon instead of enduring it all herself, knowing how much Frida would hate this particular birthday party location.

Making everything worse, Shannon is twenty-three, naive, and innocent as all hell, but doesn’t mind putting her two cents in. As you might guess, Frida sports zero tolerance for her meddling. A running gag, of sorts, has Frida insult Shannon, openly, about being from Utah, basically calling her a polygamous cult member to her face, in front o the girls, not sparing any salty language.

Eventually, Frida can only complain so much, be such a grinch amongst such abject joy: No matter what feminism says about these dolls, their clothes, or the makeovers they get—and when I say “they,” yes, I mean the dolls—the girls love them and are having the best day of their lives. Sooner or later, all that unfettered happiness is going to get infectious.

I love Sara Lippmann’s stories, their brutal honesty, the stark criticism with which they perceive the world. Doll Palace is full of little tragedies, a comedy or two thrown in, Lippmann’s protagonists understanding their situations, but reflecting on them and dealing with them as they are bombarded with the absurd. Such a fantastic style and approach to story, making for a truly marvelous collection. 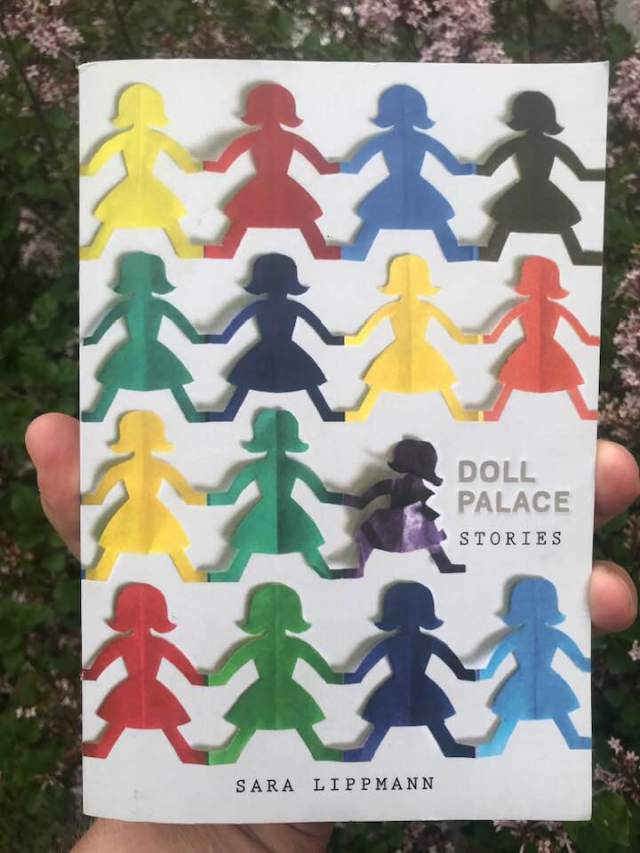