The last time I did the full-year Story366, 2016, I included a few all-Bowling Green weeks, weeks dedicated to books by BGSU creative writing program alum. BG is my MFA alma mater and over the years—it’s like the third-oldest MFA program—it has amassed a large cohort of published fiction writers. I didn’t mind playing a homer—I can do whatever I want her—plus it got me reading all those books by my friends and fellow alumni.

Going into this year, I had a few BG-authored books in my pocket, hoping to set up another week in 2020. A couple of books were recently published and added to my list, giving me five total, but those two new collections are by people I’ve already covered here at Story366. That kind of goes against the rules I’ve set up, featuring an author twice, but then again, that’s a rule I’ve been thinking of suspending. People write new books, books that need press, books that need reading.

Plus, I’m running out of books again, just over a third of the way through the year. Can I really stay that picky, just ignore awesomely appealing books on my shelf?

I’m going to cover the original three books first this week, today, tomorrow, and Wednesday, then make an executive decision for the other two. So, stay tuned for that potentially blog-altering decision. In the meantime, enjoy some Falcon-on-Falcon action.

Today, I began with Quantum Convention by Eric Schlich, out in 2018 from the University of North Texas Press as winner of the Katherine Anne Porter Prize in Short Fiction. I knew Eric as a student when I was at BG, and in fact, I sat on his thesis committee. Needless to say, I can’t be more happy for Eric or proud of him, as he’s a great writer—none of this success is the least-bit surprising.

I started with the title and lead story, “Quantum Convention,” about this guy named Colin who’s at a convention of Colins. No, not a convention for guys with that name, but a convention of versions of the protagonist Colin, pulled, I guess, from the quantum realm—see Avengers: Endgame for that logic. Anyway, Colin is there with Fat Colin and Mustache Colin and Goatee Colin and Sad Colin, etc., every Colin with a specific trait that defines him. Our Colin’s not even the original Colin, if there is such a thing, as he’s rather late to the convention. Our Colin has to adjust to being in a room filled with himselves (I just made up that word, I think), the others already on board and mingling.

The situation raises a lot of questions in our Colin’s head. What will his moniker be? How is any of this possible? Why oh why did he click on that pop-up ad?!

Colin is also on a quest, of sorts, while at the Colin convention: He wants to find the perfect version of himself. Meeting endless variation of you is one way to do that, I suppose, a concept that Schlich sells. Really, he posed a smart and interesting question: Aren’t we all just a small adjustiment or two away from a better self, the perfect s?

Colin, discouraged, leaves the convention, running into his wife, Jane, on his way out. Only thing is, Jane is not Jane, but a slightly different version of Jane, one who did not marry Colin, one who has no idea who he is. Jane clicked on the pop-up ad, too! The story, to Schlich’s creative credit, quickly abandons the Colin convention and instead places him at the Jane convention. There, most Janes don’t know him or want him around and this makes Colin think: Is he a mistake? If most versions of Jane never even meet him, it might be so.

All in all, “Quantum Convention” asks a lot of questions about fate, about reality, and about the self. It’s a fun story—I love that it all takes place at a Days Inn—but it also got me thinking about time and destiny and choices I’ve made, choices I can still make, things I could do to make myself a better person (I do have a goatee …). Cool story.

“The Keener” is the second story in the book and is about a young woman in an orphanage who makes the school’s keening team. What’s a keening team? It’s the group of girls hired to cry at funerals for people who don’t have anyone to cry for them. The girls are all pros, can cry, dramatically, on command; as orphans, they have endless material to refer to to bring them down. There’s a creepy story about a banshee and other fairy-tale ilk threaded through as well, making the story more complex than it could have been, making it better overall.

I then ran across a story I read before, in Schlich’s thesis, nine years ago, “Journal of a Cyclops.” I remember liking the story then, but immediately recognized today how much he’s worked on it, how much better it is, as, well, of course it is. This story’s about Owen, a kid born with one eye, a one-in-a-million-in-a-million birth defect. Doctors didn’t give him a week to live, yet somehow he’s 13 in this story. Because of his uniqueness, and fear of bullying, his parents don’t let him leave the house, or the yard, except to see eye doctors and shrinks. This story’s about Owen’s first friend and his first journey into public, to the local pool. Oh, and the whole thing is an epistolary, to his shrink, a story to convince him to give the thumbs up for Owen attending school in the fall.

I loved reading Eric Schlich’s stories way back in the day, and loved reading them, from Quantum Convention, today. Eric’s always been a hard worker with an unparalleled imagination, so it was inevitable that this kind of thing was going to happen for him. Now he’s got a PhD and is a professor, hi first book under his belt, with many more to come. I highly recommend you read his stories, as they’re pretty fantastic. 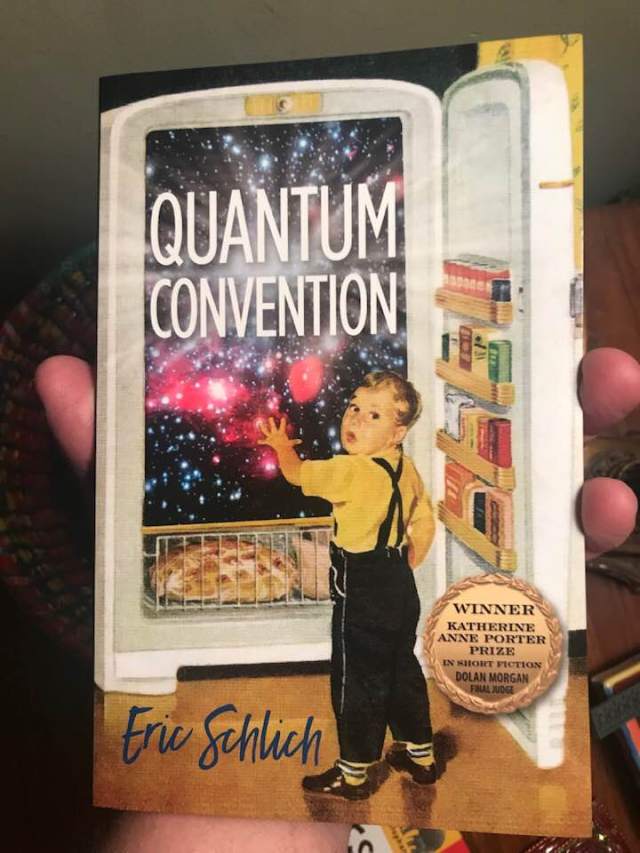