And Happy Birthday to my mom, Dolly Czyzniejewski, hitting the big 8-5 today. It’s really sad that I can’t visit her—we’re usually around Chicago this time of year—and sad that none of my family around Chicago can visit her, either. Some people might do a drive-by or talk to her through the screen door from the front lawn. We’re lucky to have her and I’m proud that she and everyone around her is playing it careful, keeping the virus away. Happy birthday, Mom. I hope it’s a great day today, and that next year, we’re all together, in someone’s back yard, having a proper celebration, the one you truly deserve.

Today I read from Sean Bernard‘s collection, Desert Sonorous, out in 2015 from the University of Massachusetts Press as a winner of their Juniper Prize for Fiction. I’ve seen Bernard’s work before, but having his collection in hand allowed me to get to know his writing more intimately, which is always a good thing. So, here we go.

The lead story, “In the days of butchers,” is a community-narrator story, told from the perspective of a high school cross country team in Arizona. They speak as a commune, sure, but there’s also a real stream-of-consciousness feel to their narration, so internal, sometimes speaking in broken sentences, the kind where capital letters are optional, along with punctuation. This group looks up to/is curious about their coach, Coach Wagner, who claims to have been an Olympic alternate—for Canada—in distance running, just four year earlier. They look at him as kind of a folk hero, following him around, looking in his window, trying to gauge how this man affects their destinies.

“Hike” is further along in the book and I read it because, well, I like hikes—would have been a great piece for the day I did that twenty-miler. In any case, this one’s about a young woman—early twenties—named Wanda. She lives in Tucson with Roland, a doctor twenty years her senior. Roland is a free spirit, a guy with as much money as he wants, is healthier than the much-younger Wanda, and oh, lives with Wanda, who’s twenty years younger than him and quite stunning. A lot of the story is Wanda dealing with this, that she’s pretty much the trophy wife, but that life is pretty good nonetheless Things are thrown awry when Roland’s daughter comes to visit, a daughter who’s Wanda’s age. Everything comes to a head on the titular hike, five miles up a desert mountain, five miles back down.

Today I’m focusing on “Pistoleros.” This one’s about Billy, a fiction writer from Tucson who’s applied for a job back in Tucson (probably at U of A) for a professor job. A lot of the story, however, takes place in Billy’s childhood, as he reminisces about a particular time, living with his sister and stepdad and dog, a time that apparently has an impact on him, years down the road. The story goes back and forth between these memories and the few days he’s in Tucson for the interview, staying with his adult sister, reliving some experiences that have been dormant for years.

Billy the kid seems like a pretty normal kid, though adult Billy doesn’t see it that way. He’s kind of a glass half-empty guy, a pretty typical creative writer without a full-time job: Every choices he’s made is suddenly tinted with regret and rethinking. Are things in Billy’s world, from his past, formed by his current disposition, or vice versa? Again, this is an introspective story—more on that coming up—and Billy thinks about that question quite a bit.

The scenes in the present seem hopeful, though, like they would in this situation in reality: If Billy gets this job, it’s a sweet life, living in his hometown, earning a regular paycheck, all his life’s pursuits confirmed, and a chance to reconnect with his sister. If he doesn’t, he goes back to what he was doing, publishing his work, wondering where his next paycheck was coming from, and talking to his sister once a year or so again, as he had been before the interview.

Still, those times, with his sister, are encouraging. His sister, who’s almost always depressed, is dating a fireman who loves, loves, loves guns. On an outing the day after his interview ends, Billy, his wife, his sister, and the gun-loving fireman go on a tour of wineries, get drunk, and start talking politics, particularly gun control. In a huge Chekhov’s gun, a gun of course comes out, and, well, I won’t say what happens, as that’s near the end of the story.

I should note that this story feels very metafictional, as Bernard, is, of course, a writer, so it’s easy to make that connection, that jump, that this is about him. I won’t go that far, just say instead that it feels like this is metafictional. Bernard certainly knows what a hometown job interview in academia means, what’s at stake. I had an interview or two in Chicago, and, well, all of the things that Billy thinks here went through my mind, those reconnections, the ramifications, the ease of falling into old routines, the attraction of the familiar.

“Pistoleros” feels representative of Sean Bernard’s style, his introspective narrators facing a situation, muddling through it inside their heads as they deal with its realities. I enjoy that type of writing, lots of interior monologue, sparse but poignant dialogue, the stakes always so high because they seem so personal, so clear. Desert Sonorous is a deep and enjoyable collection, one that held my attention for a long while today, gave me a good start to my Monday. 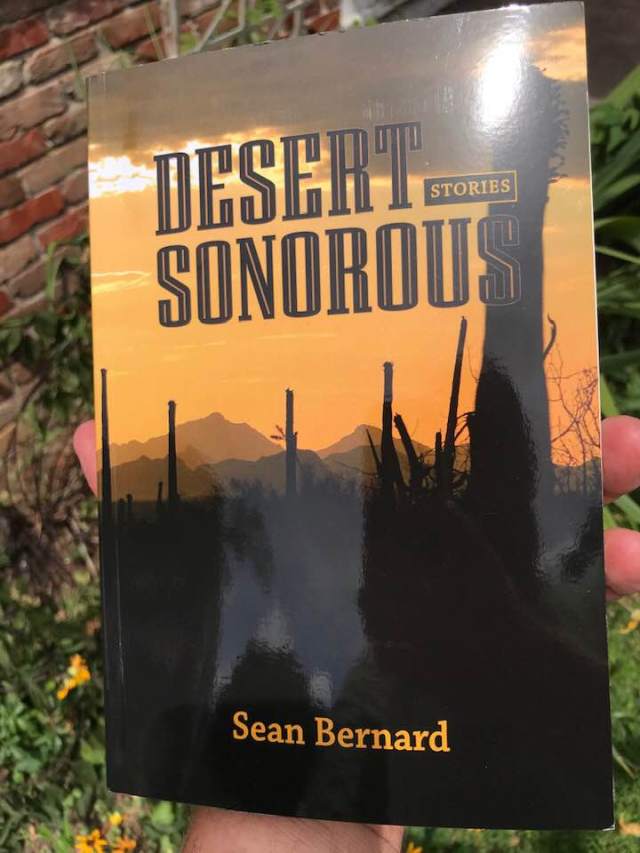